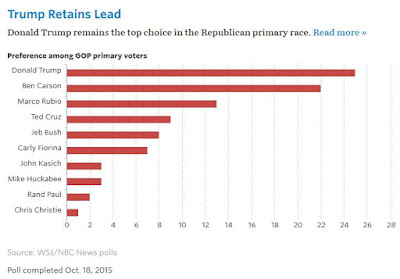 "Donald Trump and Ben Carson continue to broaden their appeal among Republican primary voters and have widened their lead over former Florida Gov. Jeb Bush and many other more-experienced candidates, a new Wall Street Journal/NBC News poll finds.

Mr. Bush, once considered the GOP’s likely nominee, is also lagging behind his onetime protege, Florida Sen. Marco Rubio, who is emerging as the leading contender to rally the party’s establishment wing against the rise of insurgent outsiders such as Messrs. Trump and Carson.

The new poll, conducted Oct. 15-18, underscores the durability—even the gathering strength—of anti-Washington candidates who had long been viewed as likely to be flash-in-the-pan political phenomena....

Mr. Trump, the reality-television celebrity and businessman, was the first choice of GOP primary voters, with 25% support, up from 21% in a late September Journal/NBC News poll.

Mr. Carson, the retired neurosurgeon, placed second in the new survey, with 22% support, a slight rise over last month despite controversy over statements he made that an observant Muslim shouldn’t be U.S. president.

Behind them was Mr. Rubio, who rose to 13% in the poll from 11% last month. He was the only other GOP candidate to draw double-digit support.

Mr. Bush, who led the field as recently as June, when he was first choice of 22% of GOP primary voters, drew 8% in the latest poll. That put him in the same league as Texas Sen. Ted Cruz...and Carly Fiorina, the former Hewlett-Packard executive....Mr. Cruz had 9% support, and Mrs. Fiorina 7%....

Full results of the new Journal/NBC News poll, which surveyed 1,000 adults, will be released on Tuesday.

Included in the survey were 400 Republicans who say they plan to vote in the primaries. The margin of error for that group was plus or minus 4.9 percentage points."

"How the GOP Stacks Up in Early-Voting States" 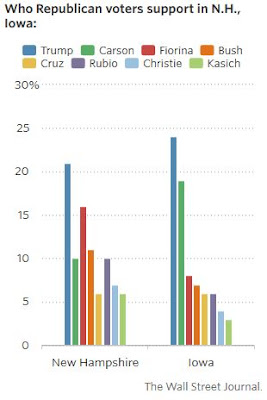