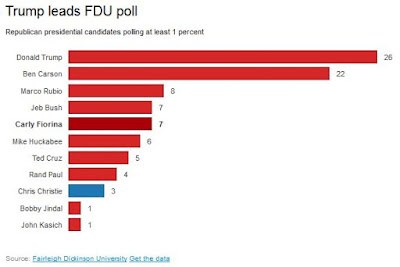 "I’m going to read you a list of current and prospective candidates for the Republican nomination for president. If the election were held today, who would you vote for? N = 305; MoE +/- 5.6"

"The most recent survey by Fairleigh Dickinson University’s PublicMind was conducted by telephone from October 1-5, 2015 using a randomly selected sample of 824 registered voters nationwide. One can be 95 percent confident that the error attributable to sampling has a range of +/- 4.1 percentage points, including the design effect. The margin of error for subgroups is larger [eg, Republican, Democrat, Independent] and varies by the size of that subgroup. Survey results are also subject to non-sampling error. This kind of error, which cannot be measured, arises from a number of factors including, but not limited to, non-response (eligible individuals refusing to be interviewed), question wording, the order in which questions are asked, and variations among interviewers.

Interviews were conducted by SSRS of Media, Pennsylvania, with professionally trained interviewers using a CATI (Computer Assisted Telephone Interviewing) system. Random selection is achieved by computerized random-digit dialing. This technique gives every person with a landline or cellular phone number (including those with unlisted numbers) an equal chance of being selected.

The sample was purchased from Marketing Systems Group and the research was funded by Fairleigh Dickinson University."