Above, Vine, Mike Valerio, "Trump did it. He managed to fill a football sized room here in Richmond" 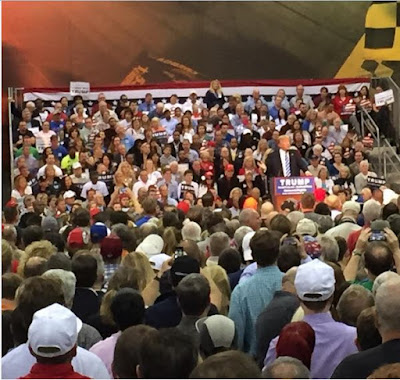 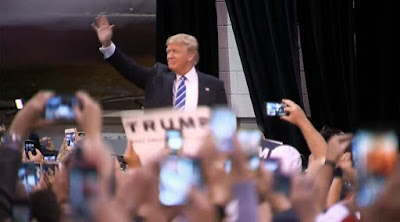 Above, Trump in Richmond, Va., nbc12.com

"Thousands turned out to hear Republican presidential hopeful Donald Trump at his first rally in the Richmond area since announcing his presidential run.

This visit comes just five months after Trump's last visit to the area, before he announced his bid for the White House. The rally at the main exhibition hall at Richmond International Raceway lasted for about one hour.

Tickets were free, but all were distributed to the crowd of between 5,000 and 7,200 people. Crowds stood in a line nearly a quarter-mile long before the doors opened at 5 p.m.

While much of the attention is focused on Iowa and New Hampshire, Virginia is part of Super Tuesday when several states will hold their primaries on March 1. It's a huge prize in what's being called the SEC primary, with the biggest states in the South.

Black Lives Matter and Hispanic protesters were able to briefly disrupt the rally. Henrico police escorted out the protesters, who began chanting when Trump spoke about building a wall between the US and Mexico. The protesters held up a sheet with writing on it and some small fights broke out. The rally continued after the disruption, which lasted a few minutes.

Trump spent a good portion of the speech discussing the latest polling numbers, which showed him leading on several key issues, and talking about foreign policy and international trade issues.

He also discussed the CNN Democratic Debate held on Tuesday, calling Bernie Sanders a "socialist/communist" and saying Hillary Clinton "did okay last night because nobody attacked her."

He reiterated his plans to "repeal and replace Obamacare" citing rising premiums and limited choices under the plan." 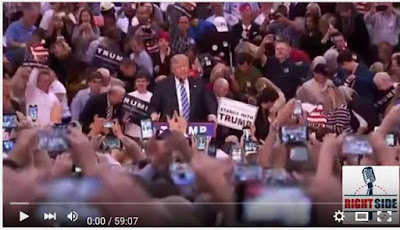 Above, still photo from Trump Richmond speech, You Tube

via The Conservative Treehouse