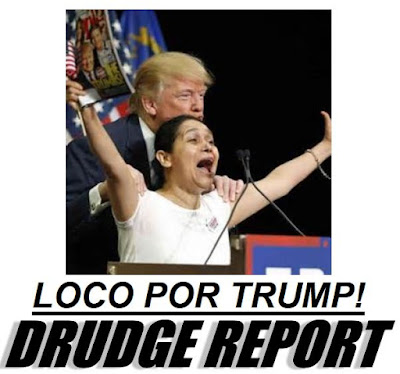 10/8/15, Trump mentioned his recent People Magazine cover, a lady in the audience waved a copy of it, so Trump invited her on stage. From CSPAN video: 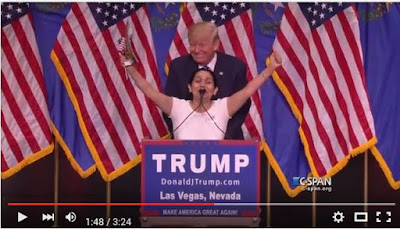 "Published on Oct 8, 2015: At a campaign rally in Las Vegas Donald Trump discusses being on magazine covers and brings a supporter from Colombia on stage. Watch the complete video here: http://cs.pn/1JULtZv"

"Donald Trump’s Las Vegas rally Thursday was interrupted when an adoring Hispanic fan was led to the stage proclaimed that Latinos love the Republican businessman.

“Hello Mr. Trump!,” said the woman, who Trump kissed as she clutched a copy of his People magazine cover.

Trump, who has come under fire for his comments about Hispanics, seemed to understand how it might be perceived.

“I swear to you--I think she’s totally beautiful and great--I’ve never met her before, I swear,” he said, as he criticized his own nose and his face in the cover photograph.

“It’s beautiful and perfect,” said the woman, who was not identified but she was originally from Colombia.

Trump sent her off the stage after obliging the woman’s request for a signature."

"CLIP: Trump and a supporter from Colombia (C-SPAN)"