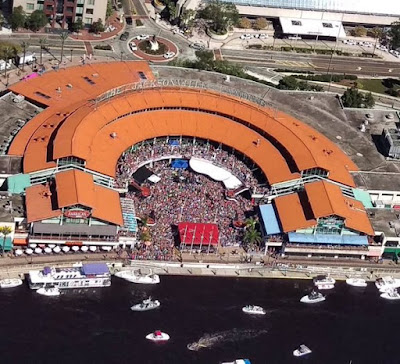 "On a sun-soaked Saturday morning supporters of Donald Trump started arriving early and continued to cram into the Jacksonville Landing to hear from the Republican front-runner....

In Florida polls, Trump remains far ahead of Bush, the state's former two-term governor, and Rubio, the state's junior senator since 2011.

A University of North Florida poll of likely Republican primary voters out this week found Trump with the support of 22 percent. Carson, who also lives in the state, had 19 percent. Rubio was third with 15 percent and Bush fourth with 9 percent.

Trump's team announced Friday that Joe Gruters, the vice chair of the Florida Republican Party, will serve as his Florida campaign chair, while Susie Wiles, who managed Gov. Rick Scott's winning 2010 campaign, will serve as co-chair.

That puts him ahead of many of his rivals, including Rubio and Carson, who have yet to open offices in the state."