"Despite being popular Spanish-speaking Florida politicians, neither Jeb Bush nor Marco Rubio has managed to take lead among Republican voters or Latino voters in their home state in the 2016 presidential race.

A Quinnipiac University poll released on Oct. 7 shows that Bush, a former two-term governor in Florida, is polling in fourth place in the Republican presidential contest in Florida, while Rubio, a current Florida senator, is in third place. Both candidates are considerately trailing outsiders Donald Trump and Ben Carson.

The poll, which surveyed 1,173 Florida voters from Sept. 25 to Oct. 5, shows 28 percent of registered Republicans support Trump, 16 percent back Carson, 14 percent favor Rubio and 12 percent stand behind Bush.
........
This comes as a bit of a surprise since Bush and Rubio were long thought to be strong favorites in Florida. Bush was easily elected governor in 1998 and 2002, and Rubio won the U.S. Senate in 2010. However, experts say Florida voters, like most GOP voters across the country, now favor candidates who have not previously worked in Washington.

"The generally more energized Republican party members, who backed former Gov. Bush and Sen. Rubio when they ran for office in the Sunshine State, are deserting the establishment candidates for the outsiders -- specifically Trump and Carson," Peter A. Brown, assistant director of the Quinnipiac Poll, said in a statement.

It's also quite surprising that Trump has managed to become more popular than Bush or Rubio among Florida Latino voters in wake of his anti-immigration rhetoric. Trump, who advocates the building of a wall on the U.S.-Mexico border and deporting all 11 million undocumented residents, actually trounces Bush among Hispanic voters, 37 percent to 29 percent, according to a September Public Policy Polling survey.

In addition, Trump even topped Rubio by one percentage point among Latino voters, making him the GOP candidate with the highest Latino favorability numbers in the heavily Hispanic state.

The numbers also come at a surprise since both Bush and Rubio have strong personal ties to the Hispanic community -- Bush married a Mexican woman and touts his fluency in Spanish, while Rubio is the son of Cuban immigrants.

However, Rubio's position on immigration reform may have hurt his outreach efforts to the Latino community when he announced that he would not fight to grant undocumented immigrants legal status if he won the White House. Instead, he said that a legalization program should not be execute for at least another decade.

"I don't think it's a decision you have to make on the front end. The first two things you have to do is stop illegal immigration, then second you have to modernize our legal immigration system, and then third you can have a debate about how to even legalize people to begin with," Rubio said during an interview on Fox News last month, reports Bloomberg. "And then ultimately in 10 or 12 years you could have a broader debate about how has this worked out and should we allow some of them to apply for green cards and eventually citizenship."

"He opposes relief for immigrants who will be relegated to second-class status if he has his way. If elected, Rubio guarantees immigrants zero results and an agenda that is stuck in the past with no hope for the future," said Pablo Manriquez, the director of Hispanic media for the Democratic National Committee.

On the other hand, Bush has announced that he is in favor of providing undocumented immigrants with legal status without a pathway to citizenship.

"As he outlined in his book on this issue, Gov. Bush believes in a conservative legislative solution to fix our broken immigration system that includes earned legal status for those currently in the country after they pay fines and taxes, learn English and commit no substantial crimes while securing our border," said Bush campaign spokeswoman Emily Benavides, reported CNN." 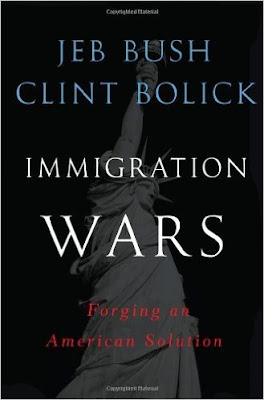 "What the media doesn’t understand is that Hispanics are people, actual human beings, not symbols. No one respects being pandered to. Republican voters respect strength and honesty. You might not agree with everything Trump says, but he doesn’t pull any punches and he projects strength and confidence.

Among all Florida GOP voters, according the Real Clear Politics poll of polls, Trump is up +11% with 26% support. In second place, Rubio and Bush sit at just 14%."...