Bernie Sanders says open borders is 'a Koch brothers proposal' to flood the US with cheap labor and depress wages of those already here. Vox writer says Sen. Sanders is wrong to view American lives as more worthy than those of foreigners

"If I could add one amendment to the Constitution, it would be the one Wall Street Journal editorial page editor Robert Bartley once proposed: "There shall be open borders." There is no single policy that the United States could adopt that would do more good for more people. An average Nigerian worker can increase his income almost 15-fold just by moving to the United States, and residents of significantly richer countries like Mexico can more than double their earnings. The humanitarian gains of letting everyone who wants to make that leap do so would be astounding.

So I was disappointed, if not surprised, at the visceral horror with which Bernie Sanders reacted to the idea when interviewed by my colleague Ezra Klein. "Open borders?" he interjected. "No, that's a Koch brothers proposal." The idea, he argued, is a right-wing scheme meant to flood the US with cheap labor and depress wages for native-born workers. "I think from a moral responsibility, we've got to work with the rest of the industrialized world to address the problems of international poverty," he conceded, "but you don't do that by making people in this country even poorer."

There are two problems with Sanders's view on this, one empirical and one moral. He's wrong about what the effects of an open-border policy would be on American workers, and he's wrong in treating Americans' lives as more valuable and worthy of concern than the lives of foreigners.

The existing economic literature suggests that eliminating all barriers on movement between nations would increase world GDP by 50 to 150 percent. The midpoint estimate is that the world economy would double. That's because people are much more productive in rich countries. Because of better technology, more skilled co-workers, better institutions, and the like, a worker doing the same job will earn vastly more for it in the US than in, say, Haiti. And if everyone were able to take jobs where they'd earn the most, the cumulative effect on the economy would be massive....

The positive economic effects of immigration extend beyond just wages. Immigration increases property values, building wealth for many native-born workers (and, admittedly, raising rents for others). Increased immigration reduces the price of services provided by immigrants, such as gardening and housekeeping. There's some evidence that immigration even gets more women into the workforce by making it cheaper to hire people to watch after children and elderly relatives, and perform other homemaking tasks....

Economist Bryan Caplan once told me. "If production in the world were to double, almost everyone is going to get enough of that doubling that they’re going to, in the end, be better off as a result."...

The claim that American-born workers would suffer from open borders and increased immigration is bogus, and he (Bernie Sanders) should stop making it....

Even if you think this makes sense, it doesn't make restricting immigration acceptable. Privileging the interests of Americans doesn't mean that US policymakers have the right to needlessly hurt foreigners.

Not even the most ardent nationalist would say that the US has a right to, say, massacre 10,000 foreign civilians to save a single American life. And make no mistake: Using force to restrict access to the United States hurts foreigners dramatically....

Our border policy is causing major, unacceptable harm to immigrants. Even if you don't think the US is obligated to help immigrants, restricting immigration is wrong, because it actively hurts them....

I think Bernie Sanders is obligated to weigh the interests of a poor potential Nigerian immigrant equally to those of a much richer native-born American. I think if he saw an immigrant drowning in a pond, he has just as much of a duty to rescue her as he would if she were a native-born American, and the same duty applies when he's voting in the US Senate. Taking that idea seriously — the idea that all people are created equal, and deserve to be treated as though their lives matter regardless of their place of birth — entails supporting open borders.
............
I don't doubt that Sanders thinks he takes equality seriously. I'm sure he thinks he's an egalitarian. I'm sure he believes that Nigerian lives and Bangladeshi lives and Haitian lives matter. But if he does, then his views on immigration must change." Image above of Bernie Sanders from Vox

Comment: If the goal is to have the least pain for the least number of people, wouldn't it be more humane for governments of so-called poor countries to change their ways instead of forcing mass exodus of their populations? Many countries still have greedy monarchies and/or dictatorships which even if portrayed as benign are parasites on the people and accrue massive wealth. The UK monarchy is an obvious example.

Added: The Vox author seems unaware that the US has an excess supply of labor, is in no position to absorb millions more people looking for jobs, and for several reasons won't be for the foreseeable future:

"For decades, wages and incomes for the American worker have been stagnant, even as productivity has increased substantially. Over the 2000 to 2009 period, workers experienced a “lost decade,” with incomes falling by nearly five percent and wages hardly growing at all. And according to Jed Graham, the last decade in terms of real wages was actually worse than the Great Depression."...

2010, "The crisis of middle-class America," FT Magazine, Edward Luce (article is undated but may be from 2010)

Luce won an award for his article about the destruction of the US middle class:

8/16/2010, "Financial Times writer Edward Luce has won the July Sidney Award from the Hillman Foundation for his story, “The Crisis of Middle Class America.”"

Per US gov. data, excess supply of labor has held back US wage gains: 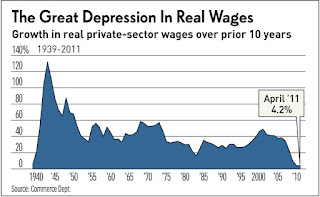 "There are several culprits, of which by far the biggest has been the net loss of 2.7 million private nonfarm jobs since March 2001. (Government payrolls rose by 1.2 million over that span.) That excess supply of labor has given employers the upper hand in holding back wage gains."...

"The increase in total private-sector wages, adjusted for inflation, from the start of 2001 has fallen far short of any 10-year period since World War II, according to Commerce Department data. In fact, if the data are to be believed, economywide wage gains have even lagged those in the decade of the Great Depression (adjusted for deflation).

Two years into the recovery, and 10 years after the nation fell into a post-dot-com bubble recession, this legacy of near-stagnant wages has
helped ground the economy despite unprecedented fiscal and monetary stimulus — and even an impressive bull market. Over the past decade, real private-sector wage growth has scraped bottom at 4%, just below the 5% increase from 1929 to 1939, government data show.

To put that in perspective, since the Great Depression, 10-year gains in real private wages had always exceeded 25% with one exception: the period ended in 1982-83, when the jobless rate spiked above 10% and wage gains briefly decelerated to 16%.

There are several culprits, of which by far the biggest has been the net loss of 2.7 million private nonfarm jobs since March 2001. (Government payrolls rose by 1.2 million over that span.)

That excess supply of labor has given employers the upper hand in holding back wage gains.

Then there is a dramatic, decade-long job shift that has occurred. The often higher-paying goods-producing sector, including construction and manufacturing, has shed 26% of its workers. Meanwhile, typically lower-paying service industries have kept growing their payrolls: social assistance (41%), nursing homes (21%), leisure and hospitality (10%).

"To the extent you have more hotels and fewer manufacturing jobs," the changing composition of the work force has been a negative for wage growth, said John Silvia, chief economist at Wells Fargo Securities.

Behind this job shift is the globalization of production, which has fed "the substitution of capital for labor" amid a push for productivity and competitiveness.

"Brain, not brawn, is required" for today's high-skilled factory jobs in the U.S., Silvia said.

A third trend is the increase in nonwage compensation — fueled by the growth of tax-free health care spending — which has eroded real wage gains.

A fourth factor, rising food and fuel prices, has taken a bite out of real wage growth in the past year.
The long dry spell for real wage gains tests the natural resilience of America's consumer economy."...image from IBD, via Think Progress

"Baby-boomers are finding that they will never be able to retire, and college students are moving back in with their parents. All are mired in mountains of consumer debt or student loans. This is the situation that Edward Luce sees, in his article “The crisis of middle-class America.”

What is clear is that (mainstream) economists do not have a good explanation of why the middle class living standards have stagnated over the past three decades. It’s about time we start looking at more relevant data than the stock market and GDP, as Luce cites:


The slow economic strangulation of the Freemans and millions of other middle-class Americans started long before the Great Recession, which merely exacerbated the “personal recession” that ordinary Americans had been suffering for years. Dubbed “median wage stagnation” by economists, the annual incomes of the bottom 90 per cent of US families have been essentially flat since 1973 – having risen by only 10 per cent in real terms over the past 37 years. That means most Americans have been treading water for more than a generation. Over the same period the incomes of the top 1 per cent have tripled. In 1973, chief executives were on average paid 26 times the median income. Now the multiple is above 300.

Only once we start looking at the relevant economic data can we begin to address the structural problems that have been rewarding the few at the expense of the majority."