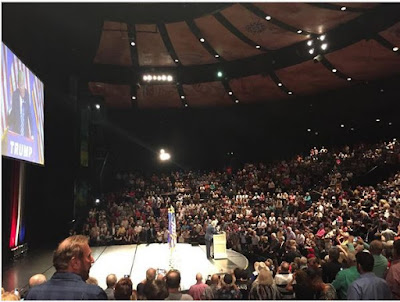 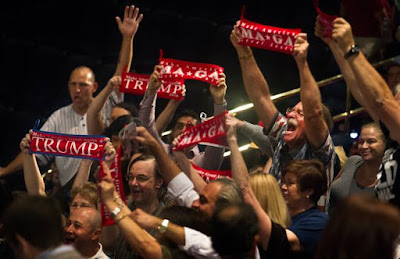 "With some gathering as early as 4 a.m., a crowd of hundreds of supporters gathered at the Mystere Theater at Treasure Island on the Las Vegas Strip to hear Republican frontrunner Donald Trump deliver a speech in what The New York Times is calling a “High Noon Out West” showdown between Trump and Florida Senator Marco Rubio, both of whom are in town today in campaign appearances.

Standing in line to see Trump, Stan Vaughn, a Republican candidate for the state Assembly, said that Trump was “the only one who can create jobs for 95 million Americans.” One Las Vegas business student echoed the sentiments, saying, “Trump is the most trustworthy and honest candidate.”

Several Latino supporters were present in the crowd. Colombian immigrant Myriam Witcher praised the real estate mogul’s opposition to illegal immigration, saying, “He needs to send illegal (immigrants) out of the country. I came here legally.” She added that since she had waited five years to receive a visa that other immigrants ought to wait as well.

“I’m Hispanic, Latina and I love me some Trump,” she said. “He’s the perfect man, a businessman.”

“I like what Trump says about securing the borders,” said Paul Rodriguez Jr. of Apple Valley, California, who described himself as “an American first, of Mexican descent.” He is the coordinator of America First Latinos, a group organized by the Remembrance Project, which describes itself as honoring “Americans who have been killed by illegal aliens.” Rodriguez, a retired grocery warehouse worker, added, “the thing I like about Donald Trump is he’s not a professional politician. Obama has destroyed our country.” 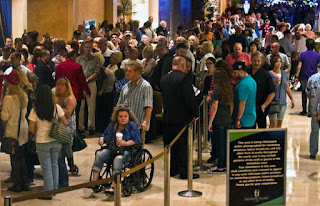 Ellie Richel from Henderson protested the notion that Trump supporters were unintelligent. She said she had two degrees — one in business and one in dental hygiene. She said she would be caucusing for Trump because of his proposal to put up a wall between the United States and Mexico. Rubio, she said, was too “establishment” for her.
...........
Trump is scheduled to speak at noon today in Nevada, a critical early-voting state in the Republican nomination. His appearance comes on the same day that Rubio will begin a three-day campaign swing here, beginning this evening with an appearance at Sun City Summerlin.

The rival events highlight the stark contrasts between the two candidates. Trump will be speaking in a room that houses a Cirque du Soliel show — and seats over 1,500. Rubio will take a more conventional approach, speaking at a retirement community, a happy hour at the Havana Grill in Las Vegas and in Boulder City. He’s also meeting with donors today in what has been billed the “Quarter Four Strategy Summit.”"

"Republican presidential front-runner Donald Trump is getting laughs, cheers and signing magazine covers at a rowdy campaign rally inside a Las Vegas theater.

The audience inside the packed 1,620-seat theater inside the Treasure Island casino-hotel reacted excitedly to Trump's criticism of media coverage, fellow presidential candidates and today's announcement Republican Congressman Kevin McCarthy had dropped out of a race to lead the U.S. House of Representatives.

The two own the Trump International Hotel in Las Vegas."

The billionaire businessman and longtime real estate mogul told the crowd there was a waiting list for the event, which filled up.

Trump is leading the polls, tapping into an anti-establishment fervor that favors other candidates without elected experience, including retired neurosurgeon Ben Carson.

The GOP has a crowded field of 15 candidates. Nevada, with February caucuses, is an early-voting state that is a key indicator of determining who gets the Republican and Democratic nominations.

Another Republican presidential hopeful, U.S. Sen. Marco of Florida, has an event in Las Vegas at 5:30 p.m. today."