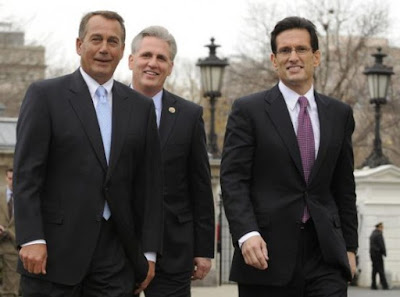 "John Boehner – RESIGNED due to pressure from the electorate
........
Kevin McCarthy – CIRCLING THE DRAIN"

Eric Cantor – FIRED by the electorate"

10/8/15, "Kevin McCarthy Drops Out of Race For Speaker of House," the last refuge, sundance

"Yesterday Representative Walter Jones of North Carolina asked any SoH candidate to drop out of the race if they had any embarrassing skeletons in their closet. Today, unable to find enough supportive votes, Kevin McCarthy dropped out.

There were three primary candidates being considered: Kevin McCarthy, Daniel Webster and Jason Chaffetz. However, as soon as McCarthy withdrew his name, Speaker John Boehner cancelled today’s vote. The progressive Republican party leadership are unwilling to accept a non-GOPe name for consideration. It appears the GOPe are going to approach Paul Ryan and request his reconsideration.

While it wasn’t the only factor, the House Freedom Caucus’ decision to vote as a bloc was a huge blow to McCarthy’s count and his ego. Ohio Rep. Jim Jordan, who was poised to run for House majority leader, cast doubt on whether McCarthy could win the speakership. Members of the House Freedom Caucus met privately with McCarthy days before the planned vote, and threatened to overthrow him as speaker if he did not accede to their demands.

McCarthy said when the Freedom Caucus endorsed Florida Rep. Daniel Webster “that showed how tough of a hill I had to climb.”

McCarthy said he’s not sure if he will endorse a candidate for speaker, but there’s already talk about a caretaker to hold the speaker’s gavel until the end of 2016. 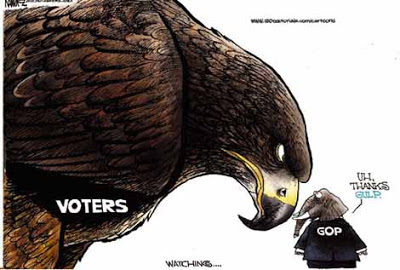 Above image was published after Nov. 2010 Republican landslide elections which brought the GOP out of well deserved Siberia. They had done nothing to deserve the landslide victories we gave them, nor did we have any reason to believe they would change their behavior. From the expression on the bird figure's face above, he also knew it was not a time for us to celebrate, that the battle was far from over. via Lucianne