(UK Telegraph, 5/24/09): "Andy Thompson of Association of Private Client Investment Managers and Stockbrokers (APCIMS) said: "The cost and administration of the US tax regime is causing UK investment firms to consider disinvesting in US shares on behalf of their clients. This is not right and emphasises that the administration


One executive at a top UK bank who didn't want to be named for fear of angering the IRS said: "It's just about manageable under the current system - and that's because we're big. The danger to us is suddenly being hauled over the coals by the IRS for a client that hasn't paid proper taxes. The audit costs will soar. We'll have to pay it but I know plenty of smaller players won't."

Ahead of the meeting APCIMS, whose members manage £400bn of Britain's wealth and employ 25,000 people, has sent a letter to the IRS complaining that the "unfair" proposals represent "no benefit but... significant cost" to its members.

President Obama's proposals are built on the so-called Qualified Intermediary system which was intended to ensure Americans paid the correct tax wherever they were domiciled.

In return, the banks receive a QI seal of approval as a qualified intermediary."

(4/10/09): "President Obama has recently completed the most successful foreign policy tour since Napoleon's retreat from Moscow. You name it, he blew it. What was his big deal economic programme that he was determined to drive through the G20 summit? Another massive stimulus package, globally funded and co-ordinated. Did he achieve it? Not so as you'd notice.
But when it comes to the critical moment of opening their wallets -


On to Nato and the next big objective: to persuade the same European evasion experts that America, Britain and Canada should no longer bear the brunt of the Afghan struggle virtually unassisted. The Old World sucked through its teeth, said that was asking a lot - but, seeing it was Barack, to whom they could refuse nothing, they would graciously accede to his wishes.

So The One retired triumphant, having secured a massive contribution of 5,000 extra troops - all of them non-combatant, of course - which must really have put the wind up the Taliban, at the prospect of

Then came the dramatic bit, the authentic West Wing script, with the President wakened in the middle of the night in Prague to be told that Kim Jong-il had just launched a Taepodong-2 missile. America had Aegis destroyers tracking the missile and could have shot it down. But Uncle Sam had a sterner reprisal in store for l'il ole Kim (as Dame Edna might call him):

"Rules must be binding," declared Obama, referring to the fact that Kim had just breached UN Resolutions 1695 and 1718. "Violations must be punished." (Sounds ominous.) "Words must mean something." (Why, Barack? They never did before, for you - as a cursory glance at your many speeches will show.)

he is going to slice $1.4bn off America's missile defence programme, presumably on the calculation that Kim would feel it unsporting to hit a sitting duck, so that will spoil his fun.

on nuclear disarmament and sitting down to negotiate with any power freak who wants to buy time to get a good ICBM fix on San Francisco, or wherever. If you thought the world was a tad unsafe with Dubya around,

Beheaded body of Nick Berg hung in Baghdad. Obama seeks to apologize for our faults. 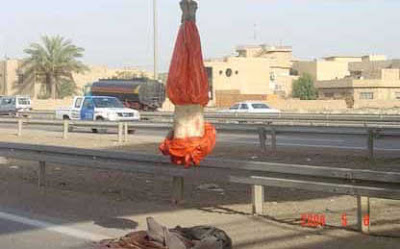 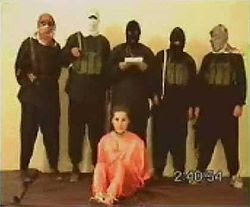 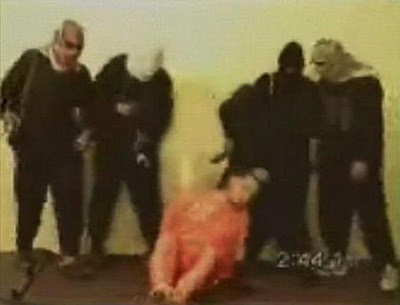 Top photo via Sweetness and Light, via MichaelSavage.com. Nick Berg was beheaded in 2004 by practitioners of the religion of peace. Obama seeks to apologize to the Muslims for such examples of American domination.
Posted by susan at 7:37 PM 1 comment:

""We spent a fortune to elect Barack Obama -- $60.7 million to be exact --
The behemoth labor organization's leadership is getting its money's worth. Whether rank-and-file workers and ordinary taxpayers are profiting from this ultimate
The two-million-member union, which represents both government and private service employees, proudly claimed that its workers "knocked on 1.87 million doors, made 4.4 million phone calls … and sent more than 2.5 million pieces of mail in support of Obama." It dispatched SEIU leaders to seven states in the final weekend before the election to get out the vote for Obama and other Democrats.

California officials also reported last week that the Obama White House gave the SEIU an unprecedented role in negotiations over federal stimulus funds. According to the Los Angeles Times, the union lobbied the feds to withhold nearly $7 billion in stimulus money from California unless it revoked a wage cut for unionized health care workers -- which had already been approved by Democratic lawmakers as part of a budget deal forged in February. Top SEIU officials participated in a conference call last month on the issue; the Obama White House backs the union demands.

The campaign money was raised by slapping an extra $6-per-member fee on top of regular dues payments -- and funneled straight to the union's political action committee. Meanwhile, after spending a fortune to put Obama in office, the union laid off a third of its D.C. field staff (in violation of its own employment protections, according to the workers) due to … budget troubles.

The laid-off workers are collateral damage in Big Labor's pursuit of power. The only jobs guaranteed by SEIU's merger with

"Intercommunity tension" as per language police in the UK

The feminization and extinction of England

"Sen. Dick Durbin, on a local Chicago radio station this week, blurted out an obvious truth about Congress that, despite being blindingly obvious, is rarely spoken:
The blunt acknowledgment that the same banks that caused the financial crisis "own" the U.S. Congress -- according to one of that institution's most powerful members -- demonstrates just how
Link to radio station audio on progressillinois.com post.
Posted by susan at 9:54 PM No comments: