After UN stunt, French see Obama weaker than ever

As The Wall Street Journal reported this morning, French president Nicolas Sarkozy was less than impressed with Barack Obama’s performance last week in the face of the Iranian nuclear crisis.

According to the paper,

“President Sarkozy in particular pushed hard. He had been “frustrated” for months about Mr. Obama’s reluctance to confront Iran, a senior French government official told us, and saw an opportunity to change momentum.

and his homily calling for a world without nuclear weapons, according to the Paris daily Le Monde.

“Le Monde’s diplomatic correspondent, Natalie Nougayrède, reports that a draft of Mr. Sarkozy’s speech to the Security Council Thursday included a section on Iran’s latest deception. Forced to scrap that bit, the French President let his frustration show with undiplomatic gusto in his formal remarks, laying into what he called the “dream” of disarmament.”

“President Obama himself has said that he dreams of a world without nuclear weapons. Before our very eyes, two countries are doing exactly the opposite at this very moment. Since 2005, Iran has violated five Security Council Resolutions . . . I support America’s ‘extended hand.’

I cannot think of a more damning indictment of US global leadership than a French leader urging the president of the United States to show more backbone in confronting the world’s biggest state sponsor of international terrorism, a rogue nation about to acquire nuclear capability.

Barack Obama’s weakness on the world stage will inevitably lead to the decline of America as a superpower. That’s not “smart power” - it’ is a policy of defeat."

(In Obama's eyes and those of his masters, US defeat equals success). framus

'Nightmare Presidency --a neophyte completely out of his depth'

"He may not relish the comparison but it is now becoming increasingly obvious that Mr Barack Obama is the most hostile American President for India since Richard Nixon. In the eight months he has been in office, Mr Obama has snubbed India more than once. He has sent repeated signals that New Delhi is not integral to his Asian security architecture.
He headlined anti-trade legislation by saying it would punish those who created jobs in Bangalore rather than Buffalo,
In contrast, the tariff war against Chinese tires has not been posited in such stark bilateral terms.
Once more, India has been asked to give up its nuclear weapons and sign the Nuclear Non-Proliferation Treaty
Most alarmingly, Mr Obama has swung wildly on Afghanistan-Pakistan (AfPak). At various points his diplomats and Generals have said different things. Yet, in all this the overarching political message has been missing.
His confusion on AfPak and constant shifting of tactical milestones would suggest he has little understanding of the nature of the challenge there and,
If the Obama Administration’s most recent thoughts on AfPak are taken as final,
He would want to begin bringing troops home by early 2012,
This would mean delegating Afghanistan to the Pakistani Army, and asking it to control the Taliban. It would also activate a
This formidable combination of wealth, geography, religious appeal, unending foot-soldiers and nuclear weapons would create a monster power straddling south and west Asia. To some degree, it could be offset by a strong India and a stable Iran, which would flank AfPak. However, Mr Obama is determined that Teheran must not pursue its Bomb and India should be pressured to sign the NPT.
Given the intensely and admirably egalitarian nature of the United States presidential election process, it has always been a theoretical possibility that the country will send to the White House a person
Often this has not been the case, and incumbents have risen to the job. Sixty years ago, Harry S Truman had limited first-hand knowledge of great power bargaining but turned out to be farsighted enough to anticipate the Cold War. Mr Obama is the antithesis of this phenomenon.
"Nightmare Presidency," The Pioneer (India) Editorial, 9/28/09, via Lucianne.com. (I guess the continent of India is simply racist). (framus)
Posted by susan at 2:45 AM No comments:

Some of these students were educated on the health care debate going on in the country, while others simply took the information as fact and filled out their quiz. For those students, President Obama’s speech was their education. Is that not considered indoctrination?

" 9/23/09, "The President Speaks to our Children: Information or Indoctrination?" via Michelle Malkin, via Big Government

Email ThisBlogThis!Share to TwitterShare to FacebookShare to Pinterest
Labels: Full scale political indoctrination of children by US teachers

"In a discredit to himself, Bon Jovi has Soros and the Hollywood robots over to his yacht on St. Barts.

Email ThisBlogThis!Share to TwitterShare to FacebookShare to Pinterest
Labels: George Soros reveals it's always about babes.

Obama says no country is better than another, therefore

Email ThisBlogThis!Share to TwitterShare to FacebookShare to Pinterest
Labels: Obama must believe training children to be killers is no big deal

Memo to Obama: 9/11 Hijackers trained in the US--not Afghanistan. Code Pink, where are you now?

BBC: "On yesterday's (9/20) round of TV interviews, Mr Obama made it clear that the reason for being in Afghanistan
"2. At 5:30pm on 21 Sep 2009, Simon21 wrote: "
They flew their aircraft into buildings - it required no brilliance or particular cunning.
It was this tendency to elevate the 9/11 attackers to some vast coordinated conspiracy a massive secret army waiting to take over the world which has led to the chaos in Iraq and Afghanistan."...

Email ThisBlogThis!Share to TwitterShare to FacebookShare to Pinterest
Labels: Obama has no reason to be in Afghanistan

Obama: Legalize illegals, then give them free doctors. But Obama, why can't we have the coverage you have?

"The Washington Times reported:
that's all the more reason to legalize them and ensure they eventually do get coverage.

He also staked out a position that anyone in the country legally should be covered - a major break with the 1996 welfare reform bill, which limited most federal public assistance programs only to citizens and longtime immigrants.

"Even though I do not believe we can extend coverage to those who are here illegally, I also don't simply believe we can simply ignore the fact that our immigration system is broken," Mr. Obama said Wednesday evening in a speech to the Congressional Hispanic Caucus Institute. "That's why I strongly support making sure

folks who are here legally have access to affordable, quality health insurance under this plan, just like everybody else. "...

HOW ABOUT JUST LIKE YOUR HEALTH PLAN? PRACTICE WHAT YOU PREACH.

Wash. Times: "Mr. Obama added, "If anything, this debate underscores the necessity of passing comprehensive immigration reform and resolving the issue of 12 million undocumented people living and working in this country once and for all."" via Gateway Pundit

***I understand he doesn't say give coverage to illegals today. What he says is illegals must be made legal ("resolving the issue"). Legals get free doctors per Obama. If one is a speechwriter one can laugh, boy oh boy we really got those right wingers going nuts now. Yes, if you're a speechwriter prone to such self congratulations, you'll be a great has-been far left speech writer like David Frum, who thinks his 13 month career writing speeches for Bush gives him any kind of cred. With the failure Bush became, temp speechwriters like Frum should leave the public stage in shame.

Putin to meet with GE--what a surprise

"Reuters reports an interesting" aspect " in the wake of President Barack Obama's decision to grant Vladimir Putin his wish and kill the Eastern European missile shield:

Shortly after the pullback on the shield programme was announced, Russia's government said Prime Minister Vladimir

Putin would meet several U.S. executives on Friday from firms including

General Electric, Morgan Stanley as well as TPG, one of the world's largest private equity firms

"U.S. companies have arguably lost out to some European companies in joint ventures, and better diplomacy will likely improve the chances for investors in the strategic sectors of the Russian economy," said Carlo Gallo, senior Russia analyst at London-based consultancy Control Risks.

Email ThisBlogThis!Share to TwitterShare to FacebookShare to Pinterest
Labels: Obama pays back GE/NBC/MSNBC/CNBC 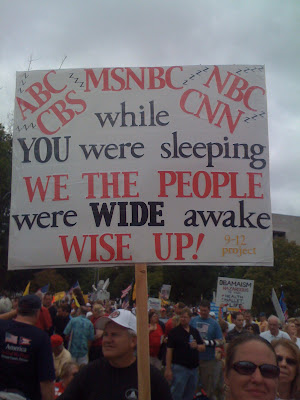 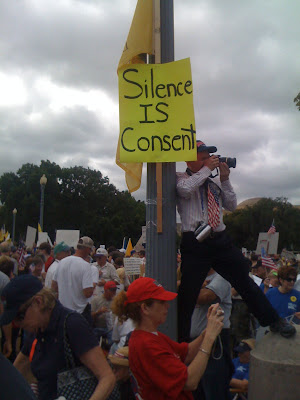 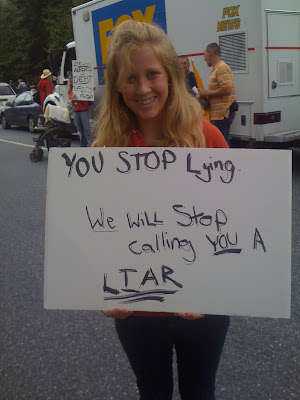 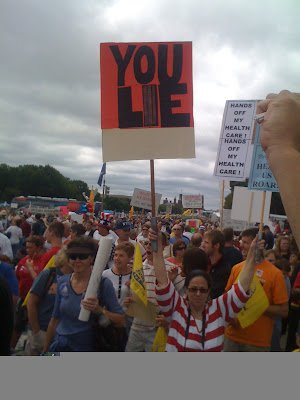 photos by Dan Perrin, RedState.com 9/12/09 in Washington, DC. (All this due
to the utter and complete failure of every elected Republican going
back to George Bush the first).

NAZIs said indoctrinating children and youth was key to victory. Obama has school children chanting his policies, as Nazis did

THIS VIDEO WAS MADE IN 2008, most likely around May and appeared on the internet a few months later, BEFORE OBAMA WAS ELECTED. It was made during school hours WITH TAXPAYER MONEY. 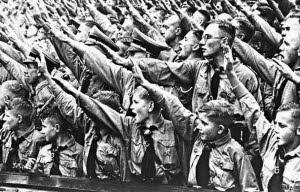 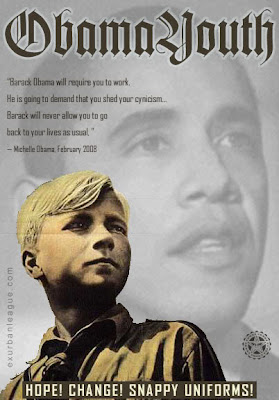 "He alone, who owns the youth, gains the Future!

The Hitler Jugend (Hitler Youth), the NAZI party's youth movement, indoctrinated German youth to perpetuate the "1,000 year Reich." The Hitler Youth movement emphasized activism, physical training, NAZI ideology, especially nationalism and racial concepts, and
"and the NAZI Party.
Once Hitler assumed control over the German state, he used the Goverment to make the Hitler Youth the country's all encompasing youth movement.
In the same year that they took power, the NAZIs organized German youth organizations into two branches of the Hitler Youth (Hitler Jugen), one branch for boys and one for girls. Membership was eventually made compulsory and all boys had to report to a neigborhood office to have his racial background checked and be registered for membership. There was then a typically elaborate introduction ceremony on the Füherer's birthday"... 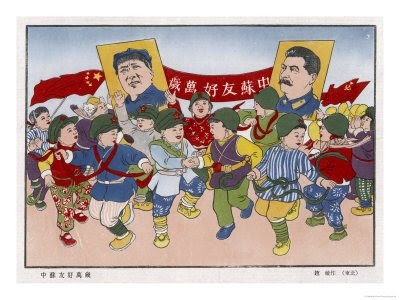 Email ThisBlogThis!Share to TwitterShare to FacebookShare to Pinterest
Labels: Obama indoctrination of US children

Kids told: Be "SERVANT FOR OBAMA"


Celebrities in ad played in Utah public, taxpayer funded school. The celebs in the ad for Obama tell children they seek an end to 200 years of slavery. Ask everyone to pledge service to Obama. Isn't Obama supposed to be of service to US citizens who pay his salary? Obama's Aunt Zeituni still lives in the slums of Boston on the backs of Massachusetts taxpayers. Obama is a millionaire yet he won't help his own relative.