As Europe dissolves before our eyes, Matt Lauer challenges Trump to defend his view on illegal immigration. Trump: 'People are pouring across our borders, and if you don't have borders, you don't have a country'-Rush Limbaugh

"RUSH: The Today show today televised a Trump town hall in New Hampshire. Matt Lauer was permitted to intrude on this town hall by interviewing Trump and asking Trump some questions. So Matt Lauer, in our first sound bite, said to Trump, "Did you see 60 Minutes over the weekend? Joe Biden was on....He said he's disappointed in you. He said your attacks on immigrants are unhealthy and beneath this country. And he says that he hopes you don't believe your own words. How would you respond to that?" 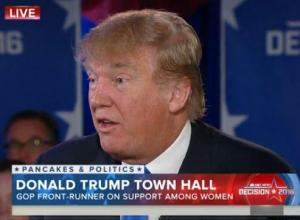 TRUMP: Matt, we have to stop illegal immigration.

RUSH:  By the way, also in my Stack today, you would not believe the stories out of Europe and the refugee migrants there. Europe is being conquered. Europe is being overrun right now and very few in governing positions in Europe are doing anything to stop it. And some are now beginning to get panicked over what they now see happening. You've got able-bodied men from desert climates standing in line freezing to death in rain, wind, and snow to get into these countries. In one little hamlet in Germany of 60 people, 1,500 migrants are going to be housed in some no-longer-used building....

That town...in Germany's been conquered. Sixty people live there; 1,500 migrants are being housed in one building there, soon to be taking it over. And that story is repeating itself over and over again, country after country in Europe. So Trump's right about this. Next, Matt Lauer said, "Well, I went back and I read from your famous book, The Art of the Deal, you wrote this: 'I play to people's fantasies. I call it truthful hyperbole. It's an innocent form of exaggeration, a very effective form of promotion.' Would it be fair to say that that describes your campaign so far, Trump?"

TRUMP: Look, I'm just telling the facts. The facts are we have a country that's going bad. We have a hundred million people that are in a workforce that can't work. Our real unemployment number is probably 22 to 30%. We have nothing but problems. We make incompetent deals with Iran. That deal is the most incompetent deal I've ever seen. I'm not just talking about between countries. I've never seen a dumber contract in my life. Obamacare is a disaster. People's premiums are going up 55%. Their deductibles are so high that nobody's ever gonna get to use it. We have a country that is in serious trouble, and I think that's why I'm leading in every poll, because I will solve the problem.

RUSH: Right. There's maturation here occurring with Trump. In the past, months ago with these two questions he would have insulted Matt Lauer and, you know, told him to get on a train on Mexico or something and to stop wasting his time with silly questions...But instead he restrains himself and just continues to say and articulate his message regardless of the inane question that he got....

It was clear that Matt Lauer is part of the establishment crowd that does not get the nature of the crisis that most Americans sense in the country. And why would he? Matt Lauer has a couple houses, a horse farm, $15 million a year and what have you...so all of this is very strange to him. He is one of these people that can't believe Trump's still in the campaign, much less leading it."....

Images above from RushLimbaugh.com

"The country plans on the premises in the Hagener Ronde district Groß Weeden to accommodate up to 1,500 refugees. The small village in the district of Lauenburg has just 60 inhabitants. Target for Schleswig-Holstein either, "the number of Erstaufnahmeplätze to increase by the end gradually to 25,000," said Interior Secretary of State Manuela Söller-Winkler on Tuesday. This was necessary to allow incoming refugees in the country a humanitarian accommodation and a regular recording procedure.

County and municipality have been taken completely by surprise by its own account of the plans. District Christoph Mager (CDU) only found out on Monday afternoon by the project...."We are still looking for the right words," said Mayor Andreas Albrecht Ronde Hagens in an initial statement. There were concerns and open questions. Finally Groß Weeden is a small hamlet. Therefore, there will soon be a public meeting at which the citizens should be informed about the plans."...

Comment: A similar invasion by indigents from violent cultures is happening daily in the US because the US political class wants it to. Defenseless US taxpayers are forced to pay billions in expenses for what will be hundreds of thousands of the "newly settled" and their pals in the booming "refugee resettlement" racket. No one is addressing the causes of so-called refugee movements. The entire focus is on breaking borders of civilized nations and demonizing defenseless citizens. Bush's 2008 William Wilberforce Act was passed unanimously. Unanimously-by royal politicians who scorn us as royals scorned peasants in days of olde and as UK monarchs still do today. Who's going to stop them? Donald Trump is the only person speaking up for us.