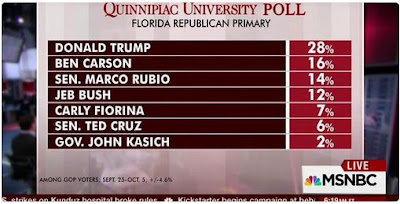 "The Swing State Poll focuses on Florida, Ohio and Pennsylvania because since 1960 no candidate has won the presidential race without taking at least two of these three states.....
.........
Trump tops the Republican primary list in Florida with 28 percent, up from 21 percent in Quinnipiac University's August 20 Swing State Poll."...

""The generally more energized Republican party members, who backed former Gov. Bush and Sen. Rubio when they ran for office in the Sunshine State, are deserting the establishment candidates for the outsiders - specifically Trump and Carson," (Quinnipiac's) Brown said."...

""Gov. John Kasich's big card was his enormous popularity in Ohio, generally considered the most important swing state in the November election," (Quinnipiac's) Brown said. "But with Trump zooming well past him in the Buckeye State and Kasich's numbers in Florida and Pennsylvania in low single digits, the Ohio governor's campaign is going in the wrong direction.""...

"Donald Trump continues to lead the Republican presidential contest, not just in early contests states like Iowa and New Hampshire, but in the key swing states of Florida, Ohio, and Pennsylvania.

“Those who were waiting for Donald Trump’s campaign to collapse will need to wait longer, at least in the three key states of Ohio, Florida and Pennsylvania,” said Peter A. Brown, assistant director of the Quinnipiac University Poll.

In Florida, Trump leads with 28%, followed by retired neurosurgeon Ben Carson with 16%. Rubio, a U.S. senator from the Sunshine State, is third at 14%. Bush, a former governor of Florida, is fourth at 12%, followed by businesswoman Carly Fiorina (7%) and Texas Sen. Ted Cruz (6%).

In analyzing the poll, Quinnipiac’s Brown noted that Fiorina and Carson — “the other two outsider candidates in the GOP race — also “seem to be making progress. But Bush, Sen. Rand Paul of Kentucky, former Arkansas Gov. Mike Huckabee and Sen. Ted Cruz of Texas seem to be treading water.”"