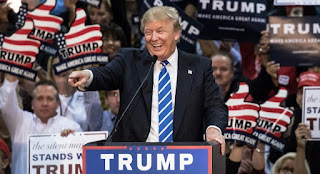 "His campaign has developed the infrastructure to put up a real fight in the earliest primaries and beyond."

While his Republican rivals have been hoping that Trump’s candidacy would fade after the initial buzz died down, he remains in first in the polls even after coming down from his September peak. Meanwhile, his campaign has been building the infrastructure necessary to put up a real fight in the earliest primaries and beyond.

The latest evidence came in Thursday’s third-quarter FEC report, which showed a $3.9 million haul, mostly from small donors, and spending on many of the trappings of a typical presidential campaign: $40,000 on ballot access consulting, $7,500 on policy consulting and payments to a growing roster of staffers and consultants in early voting states.

The report also revealed more than $35,000 of spending on direct mail in Iowa and New Hampshire, $13,000 for bumper stickers and $6,000 in payments to a Virginia company for radio media placements for a campaign that so far has avoided making major ad buys.

The campaign had already lined up local heavyweights in South Carolina, where former state house majority leader James Merrill is state director, and in Iowa, where Chuck Laudner, a veteran of Mike Huckabee’s and Rick Santorum’s winning caucus campaigns, is state director. Merrill’s firm takes in $25,000 a month from the campaign, while Laudner’s firm takes in $15,000 a month.

In New Hampshire, where Trump was the first candidate to bring on paid staffers, the state headquarters in Manchester buzzes with the coming and going of volunteers. When Trump is not in town, his New Hampshire campaign continues its work, said veteran Republican strategist Dave Carney, who remains neutral and whose wife Lauren is Carly Fiorina’s New Hampshire state director.

“They’re doing what the average campaign is doing for sure. Maybe more,” said Carney.
In South Carolina, volunteers have been put to work setting up events, distributing bumper stickers and yard signs, and performing data entry.

Trump’s campaign has offices in Myrtle Beach, Columbia, and Charleston. There is talk of a fourth office set to open in Greenville, which will give it a larger footprint in the state than almost any other campaign.

“They’re very involved,” Heather Stancil, co-chair of the Madison County Iowa Republicans, said of Trump’s operation in the first caucus state. “He has people who try to be everywhere. In fact, he had people at our Madison County Covered Bridge Festival...in a small town, it’s always nice to have folks show up and walk in your parade.”

Stancil said only three other campaigns, those of Carly Fiorina, Ben Carson and Ted Cruz, mustered visible presences at the festival.

In August, the campaign hired Charles Munoz, a veteran of the Koch Brothers’ Americans for Prosperity, as state director in Nevada. His payment for September was $4,000.

That month, the campaign began looking beyond the early states and holding rallies in Super Tuesday states that will vote on March 1, including Alabama, Oklahoma, Tennessee, Texas, Georgia, and Virginia. On Friday evening, Trump held a rally at an elementary school in Massachusetts, another March 1st state.

Trump’s rallies, which regularly dwarf those of his Republican rivals and draw thousands of attendees, help the campaign build out infrastructure in those states by requiring supporters to fill out personal information to reserve tickets online.

The campaign has taken its organization in many of these states to the next level, announcing the hiring of state directors in, Texas, Virginia, Georgia, Tennessee and Alabama in recent weeks. It has also brought on state directors for Illinois and Florida, which vote on March 15.

In Virginia, Trump’s newly hired state field director, Dena Espenscheid, a Tea Party grassroots organizer, has been organizing volunteers to gather signatures to get him onto that state’s ballot.

While all of this signals a serious turn for Trump's campaign, he is still spending far less than other 2016 GOP contenders on traditional campaign activities, including ad buys and polling.

An early test of organizing muscle will come on Saturday in New Hampshire, where Trump’s state campaign is working to turn out support for an Iowa-style caucus hosted by the anti-establishment 603 Alliance, which is hoping to settle on an outsider candidate for the state’s Tea Party, libertarian and constitutionalist factions to rally around in next year’s primary.

Aaron Day, a libertarian activist involved in the 603 Alliance, said Trump’s campaign has been lobbying Republicans for the event over email. “Cruz and Trump are being the most aggressive on this,” he said.

Carney said it was too soon to say which Republican campaign has been most effective overall at organizing in New Hampshire. “I guess we’ll know in February,” he said." image, M. Scott Mahaskey, via Politico

Comment: Politico says Trump hired Dena Espenscheid in Virginia. From her twitter page, I see she understands it will take more than a president with a "conservative" label to save this country: