Oregon killer murdered woman in a wheelchair. She went to the floor then he told her to get back on the chair. As she tried to climb back onto her chair he killed her-CNN

Relatives of two wounded victims have said the gunman asked his victims about their religion before he shot them.

One victim, Cheyeanne Fitzgerald, didn't answer and was shot in the back, her mother said. Another victim, Anastasia Boylan, told her father the gunman asked specifically whether they were Christians.

10/2/15, "Oregon college shooting: 'He asked are you Christian? Then he shot and killed them'," UK Guardian, US edition, Helen Davidson and agencies

"Anastasia Boylan, 18, was in a class when Harper Mercer came in shooting, her father Stacey Boylan told CNN. He said his daughter, who was undergoing surgery for her injuries, survived by “playing dead”.

“[Harper Mercer] came in and there was gunfire immediately and he scattered the room. From what I understood what she said was he shot the professor point blank, one shot killed him.

“Others had been injured and then this man had enough time – I don’t know how much time elapsed – he was able to stand there and start asking people one by one what their religion was.

“‘Are you a Christian?’ he would ask them, and ‘if you are a Christian then stand up’ and they would stand up.

He’d say ‘because you are a Christian you’re going to see God in about one second’ and then he shot and killed them. And he kept going down the line doing this to people.

“How much time do you need?

“She said he had a handgun. It wasn’t a big rifle or an assault rifle. This was a single handgun and he had enough ammunition and enough time to drop the magazine out of it, put another one in and continue his thing. How does he have that much time at a facility? I don’t understand that. How he could have that much time to kill that many people.”"... 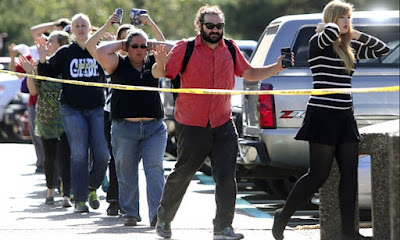