.
Pew Poll Question 35, 'no names provided,' Republican and Republican leaning registered voters who say they may vote in the primary are asked to name their own choice for presidential candidate, 9/22-9/27/15:

"The latest Pew poll shows that Jeb Bush has fallen to 4 percent in the Republican field. Donald Trump leads the field with 25 percent; Ben Carson is at 16 percent.

Carly Fiorina and Marco Rubio are tied for third at 8 percent of the Republican field. 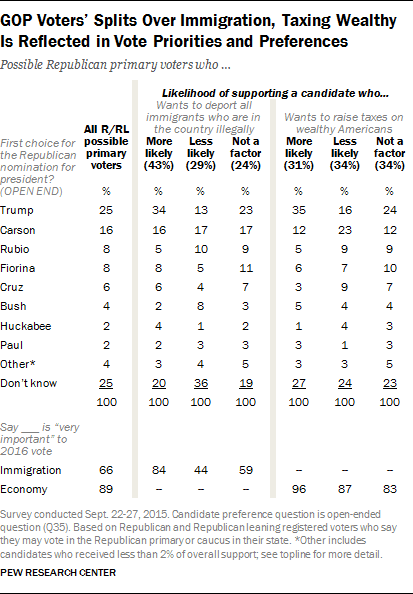 "At this stage of the 2016 presidential campaign, key issues divide both Republican and Democratic voters, and early candidate preferences reflect some of these cleavages," writes Pew.

"When Republican and Republican-leaning voters are asked in an open-ended format (no names provided) for their first choice for the nomination....

25% name Donald Trump 16% name Ben Carson, both Marco Rubio and Carly Fiorina are named by 8%, 6% name Ted Cruz and 4% choose Jeb Bush. Other candidates are named by 2% or fewer. A quarter (25%) of potential Republican primary voters do not mention a first choice today, four months before the first caucuses and primaries.""

"The survey questioned 421 Republicans in telephone calls from Sept. 22-27 and has a margin of error of 5.5 percent."

"The latest national survey by Pew Research Center, conducted Sept. 22-27 among 1,502 adults, including 1,136 registered voters, gauges the impact of various issue positions on the preferences of possible Republican and Democratic primary voters....

By far the biggest partisan gap is over the importance of the environment as a voting issue – 74% of Democratic and Democratic-leaning registered voters say the environment will be very important; only half as many Republican and Republican leaning-voters (37%) say the same....

And at this point, Republican voters also are more engaged in the campaign than they were at this stage in prior campaigns. Roughly eight-in-ten Republican voters (81%) say they have given a lot or some thought to the 2016 presidential candidates. That compares with 74% who gave at least some thought to the candidates in September 2011 and 69% who did so four years earlier....

In an open-ended question, 25% of possible Republican and Republican-leaning primary voters say Donald Trump is their first choice for the GOP nomination....

Overall, 66% of GOP potential primary voters say immigration is a very important issue in their decision about who to vote for in 2016....84% of those who say they would be more likely to support a candidate who wants to deport all undocumented immigrants say the issue is central to their presidential vote. By comparison, among Republicans who would be less likely to support a candidate who favors deportation of undocumented immigrants, just 44% say immigration is important to their vote.

The analysis in this report is based on telephone interviews conducted September 22-27, 2015 among a national sample of 1,502 adults, 18 years of age or older, living in all 50 U.S. states and the District of Columbia (525 respondents were interviewed on a landline telephone, and 977 were interviewed on a cell phone, including 560 who had no landline telephone). The survey was conducted by interviewers at Princeton Data Source under the direction of Princeton Survey Research Associates International. A combination of landline and cell phone random digit dial samples were used; both samples were provided by Survey Sampling International. Interviews were conducted in English and Spanish. Respondents in the landline sample were selected by randomly asking for the youngest adult male or female who is now at home. Interviews in the cell sample were conducted with the person who answered the phone, if that person was an adult 18 years of age or older. For detailed information about our survey methodology, see http://www.pewresearch.org/methodology/u-s-survey-research/

The combined landline and cell phone sample are weighted using an iterative technique that matches gender, age, education, race, Hispanic origin and nativity and region to parameters from the 2013 Census Bureau’s American Community Survey and population density to parameters from the Decennial Census. The sample also is weighted to match current patterns of telephone status (landline only, cell phone only, or both landline and cell phone), based on extrapolations from the 2014 National Health Interview Survey. The weighting procedure also accounts for the fact that respondents with both landline and cell phones have a greater probability of being included in the combined sample and adjusts for household size among respondents with a landline phone. The margins of error reported and statistical tests of significance are adjusted to account for the survey’s design effect, a measure of how much efficiency is lost from the weighting procedures.

The following table shows the unweighted sample sizes and the error attributable to sampling that would be expected at the 95% level of confidence for different groups in the survey:

...............
Sample sizes and sampling errors for other subgroups are available upon request.

In addition to sampling error, one should bear in mind that question wording and practical difficulties in conducting surveys can introduce error or bias into the findings of opinion polls.

Pew Research Center is a nonprofit, tax-exempt 501(c)(3) organization and a subsidiary of The Pew Charitable Trusts, its primary funder."