"The principal of an innovative West Harlem public school killed herself the day after her students took the state Common Core exams--which were later tossed out because she cheated, The Post has learned.

Jeanene Worrell-Breeden, 49, of Teachers College Community School, jumped in front of a B train in the 135th Street station on St. Nicholas Avenue on April 17, police said.

She was pulled out from under the train and taken to Harlem Hospital, where she died eight days later. The city Medical Examiner’s Office ruled it a suicide.

The leap came at 9:20 a.m., less than 24 hours after her 47 third-graders wrapped up three days sweating over the high-stakes English exam — the first ever given at the fledgling school.

It was also the same day a whistleblower reported the cheating to DOE officials.

Parents were shocked and saddened to learn Worrell-Breeden died but were given no details at the time. It was rumored she was killed in a car crash.

Parents were in for another shock in June. Superintendent Gale Reeves told them in a meeting that all the third-grade English exams had been “red-flagged” and “invalidated.”...

In a June 22 letter to families, Reeves wrote, “The integrity of the assessment was compromised due to actions outside your child’s control.”

Parents grew frustrated. No one from the city Department of Education or the state Education Department, which administers the exams, answered questions. They asked for help from politicians, including Assemblyman Keith Wright, whose staff also hit a wall.

On Friday, the DOE blamed the dead principal.

“Principal Worrell-Breeden was the subject of allegations of testing improprieties,” spokeswoman Devora Kaye said. “An investigation substantiated these allegations, and we closed the investigation following her tragic passing.”

Kaye would not say how Worrell-Breeden allegedly tampered with the tests.

Asked whether Worrell-Breeden was told of the April 17 allegations against her, DOE officials did not answer.

Those scores will be released this summer, but Tinsley said the superintendent assured parents that all the kids would be promoted to the fourth grade.

The tough Common Core exams have raised anxiety. In 2014, only 34.5 percent of city students passed the math tests, and 29.4 percent passed English tests.

“A lot of people are getting sick and leaving the system because of the pressure the high-stakes tests are putting on them,” a veteran educator said.

“She was reassuring us parents,” Tinsley said. “Her whole attitude was that they’re going to breeze through this test, and that she had prepared them to ace any test.”

Each morning of the three-part exam--given April 14 to 16--Worrell-Breeden served the kids breakfast and held a pep rally.

“She had them run around the gym cheering to get rid of their nervousness,” Tinsley said.

A family friend described Worrell-Breeden as a driven leader struggling with personal setbacks.

“Her grandmother died last year. Her husband moved out last year. He had a child with another woman. She was under a lot of pressure at home,” the friend said.

“She was the first principal at that school so she was trying to make...a good impression. “Maybe all that pressure, added to what was going on at home, got to her.”

Worrell-Breeden, who made $135,000 a year, was the founding principal of the school, which the DOE opened in 2011 in partnership with Columbia University’s Teachers College. It promised access to Columbia facilities, student interns and researchers. While planning to grow, it served only pre-K to grade 3 last school year.

Worrell-Breeden got the job despite a scandal at her former school, PS 18 in The Bronx. In 2009, the special commissioner of investigation for city schools found she had clocked in for overtime pay while working out with a personal trainer three times a week in the school gym.

Her time card “disappeared” after investigators visited the school.

The probe found she altered her time card and coerced subordinates to say she had offered them hundreds of OT hours first--as required--before taking them herself.

In a six-month period she collected more than $9,500 in OT pay, records say.

An arbitrator dismissed charges of a coverup. She was docked two weeks’ pay." 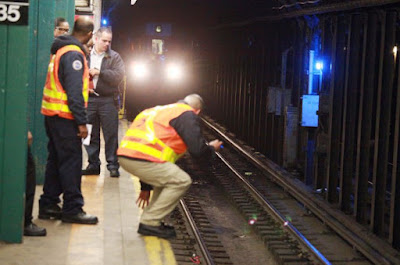