Ted Cruz book, A Time for Truth, will appear on NY Times Best Seller list this week at #7-Politico 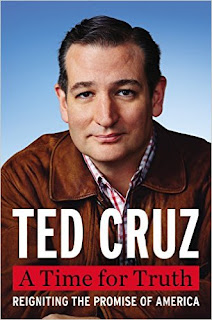 "Five days after accusing The New York Times of bias, secrecy and foul play, Ted Cruz is finally getting what he wanted: a highly coveted spot on the paper's bestseller list.

Cruz's memoir, "A Time For Truth," will appear at No. 7 on the Times' list for hardcover nonfiction, reflecting its second-week sales, a Times spokesperson confirmed on Wednesday. The Texas senator's book had not been included on the list for its first week, on the grounds that its sales had been driven by "strategic bulk purchases."

Times spokesperson Eileen Murphy said that the newspaper made no changes to its selection process, and so the fact that Cruz's book is being included now suggests a rise in individual purchases, spurred by his public battle with the paper.

"This week's NYT best seller list was arrived at using the same process as last week's - and the week before that," Murphy wrote. "That process involves a careful analysis of data, and is not influenced in any way by the content of a book, or by pressure from publishers or book sellers."

Both HarperCollins, the book's publisher, and Amazon, the largest Internet retailer in the country, said last week that they had found "no evidence" that bulk purchases drove the book's sales numbers. On Friday, Cruz campaign spokesperson Rick Tyler accused the Times of "obvious partisan bias," and called on the paper to reveal its methodology or else publicly apologize.

The Times has resolutely stood by its claim, and has refused to reveal its methodology on the grounds that doing so might threaten the integrity of the process.

"Our approach serves Times readers by authenticating broadly popular books through the confidential reporting of a wide range of retailers," Murphy said Wednesday. "In order to avoid compromising that process, we do not disclose who reports sales to us."

“A Time For Truth” was published on June 30 and sold 11,854 copies in its first week, according to Nielsen Bookscan’s hardcover sale numbers -- more than 18 of the 20 titles that appeared on the bestseller list for the week ending July 4.

Cruz's campaign is expected to comment shortly. We will update here if and when they do." via Free Rep. Image of Ted Cruz book form Amazon