"Analysis-ABC's Rick Klein: We can only speculate about what kinds of props or insults Donald Trump is bringing with him to the Texas-Mexico border today. But the new ABC News/Washington Post poll out Thursday suggests the extent to which he may not need them. Roughly half of Republicans in the poll oppose a path to legalization for undocumented immigrants-and Trump gets support from a third of those voters. Think about that: In a 16-person field, the idea that any candidate could get 34 percent of that large a slice of potential voters suggests an extraordinarily powerful issue."... 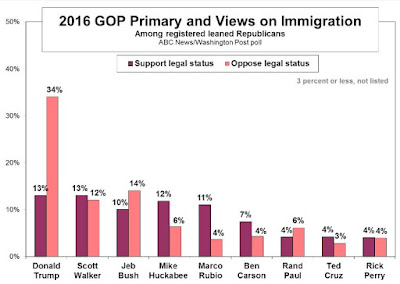 "About half of potential GOP voters in the latest ABC News/Washington Post poll oppose a path to legal status for undocumented immigrants, and Trump wins support from 34 percent in this group, [20 points ahead of his closest competitor] a remarkable tally in a 16-candidate race....

Among leaned Republicans who are registered to vote, 52 percent oppose legalization--and Trump’s 34 percent support in this group puts him 20 points ahead of his closest competitor. [p. 2 pdf] Among those favoring legalization (44 percent of leaned Republicans), though, he is essentially tied with other candidates – including Scott Walker, Jeb Bush, Mike Huckabee and Marco Rubio....

Opponents of legal status are passionate; 82 percent of them feel strongly about it [p. 2 pdf]....Americans are evenly split over which party they trust more to deal with the issue [p. 5 pdf], 40 percent pick the GOP, 37 percent the Democrats. While partisans tend to favor their own side, independents break for the Republicans by 43-27 percent....