Citizens United enabled the GOP Establishment to rid themselves of worry about elections, it especially freed them of worrying about dreaded Republican primaries and icky voters who vote in them-Sundance

"There has been a considerable response to the recent article: “Why I Support Donald Trump’s Campaign“, which has led to a larger conversation about the current cause of the problem for our body politic. That expanded conversation deserves further explanation....

Most conservatives, including myself, did not initially see that consequence coming over the horizon.

The unpredicted consequence of Citizens United has been massive amounts of money directed into the coffers of the K-Street groups, through constructs like the U.S. Chamber of Commerce.  Those funds now being used to attack political opponents trying to remove the “status quo” incumbents.

The Citizens United SCOTUS decision unleashed Wall Street to protect the Professional Political Class – the very antithesis of what most of us thought would be the outcome.  As we previously outlined Citizens United has in essence empowered our own demise.

As if on cue – two articles appeared within 12 hours of publishing yesterday’s outline.  Both articles present two examples of exactly what we were talking about.

"Allies of Senate Majority Whip John Cornyn are forming a nonprofit to support the Republican policy agenda as the threat of a partisan showdown over spending this fall continues to grow.


[…]  The decision to launch the group comes as several similar nonprofits have been created to provide Republican leaders with air cover during politically contentious battles with the conservative flank of Congress, as well as Democrats and the White House. (link)

Gee, I wonder what those “allies of Senate Majority Whip John Cornyn” are intent on doing as it relates to the budget and debt ceiling.  Perhaps you should reference the CoC position on the matter.  Nuf said.

"[…]  SLF, which was founded in mid-January, is part of a growing universe of outside Republican groups that have sprouted up over the last few years. In particular, Republican operatives have focused on defending the new GOP majority in the Senate. (link)"

….Where “defending the GOP” is defending incumbency against removal by the grass roots base within the party.

That base is probably you, maybe.

If you doubt this is actually the goal, ask yourself when was the last time you saw a GOP Non-Profit, or Super PAC, attacking a Democrat policy initiative?

They use these funds to shield their incumbency. If you need further evidence I would direct your attention to history. Perhaps you would remember Ken Cuccinelli in Virginia circa 2013 and the CoC efforts through GOP Leader Senator Mitch McConnell’s office.

Or maybe you might need to reference Thad Cochran in Mississippi’s 2014 GOP primary, where the GOP machine (PAC’s and Non-Profits) spent money on racist attack ads against Chris McDaniel – even paying Democrats to vote in the 2nd GOP primary to support the incumbent Cochran, attacking the GOP rival.

Pure incumbency protectionism facilitated by the Citizens United decision, funded through Wall Street, directly to the CoC, K-Street and protectionist PACS as outlined above.
...................
I should note here the primary organizer of that Mississippi effort, Brad Dayspring, now works for Scott Walker’s election Super-PAC. And for those who say the PAC isn’t associated with the campaign…well, the PAC was created, and Dayspring was hired, a month before Walkers’ campaign filed FEC paperwork.  That is, when Walker and the PAC were still legally able to meet, talk shop, strategize and coordinate. So, well, yeah, unfortunately Walker is directly approving of Dayspring (also see: “willful blindness”) I digress.
..............
All of this is merely outlining tripwires you can look for to see what the professional political class have in mind. Again, and I cannot emphasize this enough, this is not some weird conspiracy theory; this is purely accepting what the professionally republican leadership is going to do, when they say they are going to do it.

Nothing more, and nothing less.

Is it possible to beat them? Eh, well, Yes and No. The yes part, refers to a traditional hunting model when you are tracking a herd. You don’t aim for the center of the herd, you pick off the outliers before the herd realizes they are under attack. That’s what Dave Brat did in Virginia to remove Eric Cantor.

By the time the professional GOP herd noticed Cantor was vulnerable, it was too late.

However, it only works with one or two targets. As soon as the herd know you are approaching, it’s impossible to get another victory because they coalesce, and attack back en mass. As they immediately did in Mississippi.

So what are the consequences to all of this DEFENSIVE SPENDING?

When it comes to presidential politics you have to understand the design already in place.

We shared it yesterday, and we shared it last year when we first saw this beginning.

Right now, not one single candidate has outlined a viable strategy to beat THEIR JEB BUSH ELECTION PLAN, other than Donald Trump. You might like Rick Perry, Scott Walker, Ted Cruz, Carly Fiorina, et al… but they don’t stand a chance against the roadmap.

It’s laughable to hear someone talk about winning Pennsylvania (Walker), Ohio (Kaisch) or Texas (Cruz/Perry) primaries when you know full well the 100 delegates taken from Florida wipe out anyone else’s chances to remain in the race beyond that. (Again, see Romney 2012)....

That’s the establishment plan in ’16 too with Jeb as the Florida hometown guy.

Also, don’t forget, the professionally Republican hold all the “Super Delegates” too – who are worth a lot more than individual delegates.

All the Cruz, Perry, Walker, Fiorina campaign t-shirts 2015 are as valuable as Herman Cain, Perry, Santorum and Gingrich t-shirts in 2012. Which is to say worthless.

And for the love of God spare us another year of talks of a “brokered convention”; when you know full well the brokering within the convention is fully controlled by the Republican machine.

Hopeless?  Yeah, it was until a few weeks ago…

…Donald Trump can upend the intensely planned apple cart and snatch Florida away from Bush/Rubio.  If Trump can destroy the GOP Florida 5-state strategy, then all the other candidates stand a chance, including Trump.

But yeah, the GOP know that too. And given what you know now about what to expect from the professionally republican, what do you think Wall Street, The CoC and the GOP will do to stop Donald Trump?

Before you answer that question too quickly, remember “Citizens United”!" 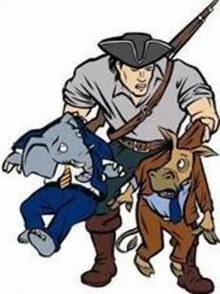