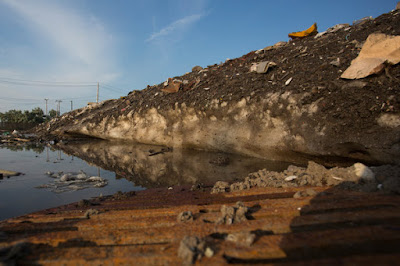 "Now that it is July, it is easy to think of Boston’s record snowfall last winter as a bad dream.

These days, you can walk outside without dressing in multiple layers. You can see your car when you stand next to it. Even the subway is running (more or less).

But if you want a reality check, come to the Seaport district, where you will find an astonishing residual artifact from the glory days of February: a 12-foot-high frozen mound, a remnant of the record 110.6 inches of snow that accumulated in Boston over the winter.

This otherwise empty lot on Tide Street is the last of 11 “snow farms” that Boston created during a punishing winter when it had nowhere left to move the relentlessly falling snow. This particular mound, once a stunning 75 feet high and blanketing four acres, lingers because it was by far the biggest.

The mayor started a contest on Twitter to solicit predictions for when the pile would disappear.

Also, the snow was tightly compacted with debris that the plows unavoidably picked up while clearing the roads over and over again — covering mileage equivalent to almost 12 trips around the Equator. That collection of trash helped insulate the dense, thick pile from the sun’s rays. And there has been little rain, which could have accelerated the melting.

All this has created the oddity that remains: an ice-encased, cinder-encrusted mound of snow laced with urban flotsam and jetsam, from candy wrappers to fire hydrants.
..............
It looks like a landfill, but it has become a landmark. It is now a frequent backdrop for photos, and a kind of mascot for workers in this semi-industrial part of town who have lived with it for almost six months. It has even attracted the attention of the mayor, who has started a contest on Twitter asking people to guess when it will finally melt and leave its frozen coil....

Those days, obviously, are long gone. Seagulls now patrol overhead as the slow-motion melt gradually reveals fresh pickings. And as the pile has diminished, so has the tenor of the assessments....

But what the mound has lost in stature, it has made up for in sheer endurance. Few predicted it would last this long....

If the mound persists as a stubborn relic of winter, though, it also serves as a warning. It has become Exhibit A in the case against dumping snow in the ocean.

If city officials had heeded the cries of fed-up residents last winter and just shoved the snow into Boston Harbor, the now-showcase waterway would be clogged with more than 250 tons of bicycles, hubcaps and other detritus. And surely, Boston would not have earned the distinction it won in May of having cleaner beaches than South Beach in Florida or Waikiki Beach in Hawaii....

As the mound melts, however slowly, more debris emerges from its innards. Highway maintenance crews come by at regular intervals to clean it up and send the refuse to a burn plant. The loads are getting heavier as they approach the bottom of the mound — chunks of concrete, manhole covers, newspaper boxes, all victims of the plow’s maw. Daniel Nee, supervisor of the highway crews, said that on May 12, workers hauled away 12 tons of trash; on June 16, the haul was 56 tons.

The well-insulated mound is actually quite chilly. Standing next to it is like standing next to a freezer with the door open. The gelid interior keeps any melting to a trickle.

“Water coming off the mound was refreezing because this mass is so cold,” Mr. Nee said.

“It’s its own little ecosystem.”

And it has had quite an existence. For winter-weary workers nearby, this uninvited guest that plopped down and grew to monstrous proportions before their eyes has proved to be an amusing diversion.

During the winter, some of its neighbors scaled its sides and planted flags at the summit. Some skied on it when it had fresh snow; at least one person has skied on the trash....

On June 25, with no end in sight, Mayor Martin J. Walsh asked people to use the hashtag #BOSMeltNow and tweet their best guess of “the day we have all been waiting for.”

A few optimists chose July 4. Many others picked dates in August or September. Some have ventured into October.

One person suggested it would all melt by Aug. 7, then dared add what few have expressed out loud: “Or maybe won’t melt before next snow comes, lol.”"

Image caption: "The mayor started a contest on Twitter to solicit predictions for when the pile will disappear. Some people have suggested October. Credit Katherine Taylor for The New York Times"