Senator Lindsey Graham told a meeting of La Raza in 2007, 'We're gonna tell the bigots to shut up.' Graham name-called 63% of his South Carolina constituents who simply wanted secure borders


6/2/2007, Wall St. Journal: "The president (Bush) has taken to suggesting that opponents of his immigration bill are unpatriotic -- they "don't want to do what's right for America." His ally Sen. Lindsey Graham said, "We're gonna tell the bigots to shut up." On Fox last weekend he vowed to "push back.""... 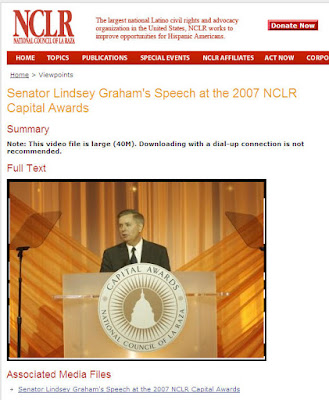 June 2007 Wall St. Journal: On immigration the Bush administration and its allies have broken with on-the-ground Republicans: "This is sad, and it holds implications not only for one political party but for the American future."
.
6/2/2007, "Too bad," Wall St. Journal, by Peggy Noonan

"What political conservatives and on-the-ground Republicans must understand at this point is that they are not breaking with the White House on immigration. They are not resisting, fighting and thereby setting down a historical marker -- "At this point the break became final." That's not what's happening. What conservatives and Republicans must recognize is that the White House has broken with them. What President Bush is doing, and has been doing for some time, is sundering a great political coalition. This is sad, and it holds implications not only for one political party but for the American future.

The White House doesn't need its traditional supporters anymore, because its problems are way beyond being solved by the base. And the people in the administration don't even much like the base. Desperate straits have left them liberated, and they are acting out their disdain. Leading Democrats often think their base is slightly mad but at least their heart is in the right place. This White House thinks its base is stupid and that its heart is in the wrong place.

For almost three years, arguably longer, conservative Bush supporters have felt like sufferers of battered wife syndrome. You don't like endless gushing spending, the kind that assumes a high and unstoppable affluence will always exist, and the tax receipts will always flow in? Too bad! You don't like expanding governmental authority and power? Too bad. You think the war was wrong or is wrong? Too bad.

But on immigration it has changed from "Too bad" to "You're bad."

The president has taken to suggesting that opponents of his immigration bill are are unpatriotic -- they "don't want to do what's right for America." His ally Sen. Lindsey Graham has said, "We're gonna tell the bigots to shut up." On Fox last weekend he vowed to "push back."

Why would they speak so insultingly, with such hostility, of opponents who are concerned citizens? And often, though not exclusively, concerned conservatives? It is odd, but it is of a piece with, or a variation on, the "Too bad" governing style. And it is one that has, day by day for at least the past three years, been tearing apart the conservative movement.

I suspect the White House and its allies have turned to name calling because they're defensive, and they're defensive because they know they have produced a big and indecipherable mess of a bill -- one that is literally bigger than the Bible, though as someone noted last week, at least we actually had a few years to read the Bible. The White House and its supporters seem to be marshalling not facts but only sentiments, and self-aggrandizing ones at that. They make a call to emotions -- this is, always and on every issue, the administration's default position -- but not, I think, to seriously influence the debate....

If they'd really wanted to help, as opposed to braying about their own wonderfulness, they would have created not one big bill but a series of smaller bills, each of which would do one big clear thing, the first being to close the border. Once that was done -- actually and believably done -- the country could relax in the knowledge that the situation was finally not day by day getting worse. They could feel some confidence. And in that confidence real progress could begin.

The beginning of my own sense of separation from the Bush administration came in January 2005, when the president declared that it is now the policy of the United States to eradicate tyranny in the world, and that the survival of American liberty is dependent on the liberty of every other nation. This was at once so utopian and so aggressive that it shocked me. For others the beginning of distance might have been Katrina and the incompetence it revealed, or the depth of the mishandling and misjudgments of Iraq.

What I came in time to believe is that the great shortcoming of this White House, the great thing it is missing, is simple wisdom. Just wisdom -- a sense that they did not invent history, that this moment is not all there is, that man has lived a long time and there are things that are true of him, that maturity is not the same thing as cowardice, that personal loyalty is not a good enough reason to put anyone in charge of anything, that the way it works in politics is a friend becomes a loyalist becomes a hack, and actually at this point in history we don't need hacks.

One of the things I have come to think the past few years is that the Bushes, father and son, though different in many ways, are great wasters of political inheritance.

They throw it away as if they'd earned it and could do with it what they liked. Bush senior inherited a vibrant country and a party at peace with itself. He won the leadership of a party that had finally, at great cost, by 1980, fought itself through to unity and come together on shared principles. Mr. Bush won in 1988 by saying he would govern as Reagan had. Yet he did not understand he'd been elected to Reagan's third term. He thought he'd been elected because they liked him. And so he raised taxes, sundered a hard-won coalition, and found himself shocked to lose the presidency, and for eight long and consequential years. He had many virtues, but he wasted his inheritance.

Bush the younger came forward, presented himself as a conservative, garnered all the frustrated hopes of his party, turned them into victory, and not nine months later was handed a historical trauma that left his country rallied around him, lifting him, and his party bonded to him. He was disciplined and often daring, but in time he sundered the party that rallied to him, and broke his coalition into pieces. He threw away his inheritance. I do not understand such squandering.

Email ThisBlogThis!Share to TwitterShare to FacebookShare to Pinterest
Labels: Senator Lindsey Graham said people who didn't want Bush immigration bill we bigots and we'd tell them to shut up