7/13/15, "'I'm going to make you eat your words': Mexico's billion-dollar drugs lord THREATENS Donald Trump on Twitter account 'run by his son' and taunts the world after his dramatic escape from prison," UK Daily Mail, by Alasdair Baverstock In Mexico City and Ollie Gillman For Mailonline

"Mexico's billion dollar drugs lord known as 'El Chapo' has gloated on Twitter about his escape from a maximum security jail by taunting authorities and threatening US-presidential hopeful Donald Trump. Joaquin Guzman, billionaire head of the powerful Sinaloa Cartel, made his jail break on Saturday morning and is on the run from Altiplano jail, 50 miles outside of Mexico City, security officials said.

His audacious escape saw him dash through the mile-long tunnel system, which led to a building under construction next to the prison - from where he collected clothes left for him by his conspirators.

But following his escape he has took to Twitter and used it to hit back at Trump, who has said that the Guzman embodies 'everything that is wrong with Mexico' and added he would 'kick his ass'.

The property magnate is taking the threat seriously.

According to TMZ the billionaire has called in the FBI to investigate the source of the Twitter account which warned Trump he would be sorry he spoke out against Mexico....

He also started calling death threats on those who have supposedly betrayed him, including El Chabelo, the current incarcerated boss of Sinaloa's rival cartel the Zetas.

Guzman wrote: 'First to die is El Chabelo, for wanting to see me die in prison.'

He then hinted that the authorities had been complicit in the jailbreak by posting: 'The dog (slang for the Mexican government) dances for money, and I've bought it.'

During his last escape, Guzman hired the help of the prison guards during his first successful escape from maximum security prison, in which he was hidden inside a laundry basket.

The drugs lord made his latest escape on Saturday through a sophisticated tunnel contained air vents, electric lights, emergency oxygen tanks - and even a motorbike on rails to speed his escape, according to Mexico's National Security Commissioner Monte Alejandro Rubido."...

Naturally, the Mexican drug kingpin has a California drivers license: 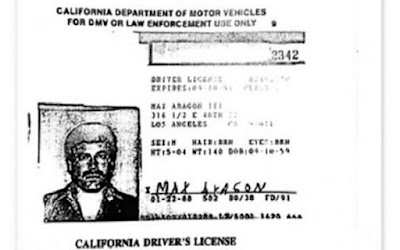 "Joaquin ‘El Chapo’ Guzman who has a $7.5 Million bounty on his head and runs the Sinaloa cartel reportedly has a U.S. driver’s license issued in California.

According to the investigative report, “The Hunt for El Chapo Guzman, Mexico’s Most Elusive Drug Lord,” by the Univision network, Guzman obtained a driver’s license under the alias of Max Aragon in 1988.  He obtained the license even though he was a wanted man by the Drug Enforcement Agency (DEA) and a Mexican national.

The driver’s license information is part of a confidential file the DEA keeps on El Chapo.

All of this begs the question - how did he obtain the license?

Reportedly the license was used by Guzman to obtained auto registrations for two Corvettes purchased in Los Angeles that were then given as gifts, possibly bribes, to several public officials in Mexico.

Guzman has numerous connections to California including building most of the narco tunnels between California and Mexico.  Late last year, his pregnant daughter, Alejandrina Guzman, was arrested for trying to enter the U.S. through San Diego with false documents.  One of Chapo’s grandchildren was born in the U.S. as well as two of his children.

Emma Coronel, who married Guzman in 2007, gave birth to twin girls on Aug. 15, 2011, at a hospital in Southern California.  The former beauty queen gave birth at Antelope Valley Hospital in Lancaster and left the father’s name blank on the girls’ birth certificates. Coronel, who is a U.S. citizen, was not arrested because she faces no charges in the United States.

The U.S. government considers the capture of Guzman mission “priority” because Guzman is the leader of the world’s most powerful criminal organization that is the largest exporter of illegal drugs to the U.S."

Comment: We'll soon see how serious Mr. Trump is about being president of the United States. I hope he is.