"Campaigners are looking to Barack Obama to expand his use of executive powers to deliver action on climate change in Tuesday night's State of the Union address....defending his decision to direct the Environmental Protection Agency (EPA) to cut carbon dioxide emissions from power plants....

The core of Obama's climate plan remains the EPA's proposed rules for power plants, the largest single source of carbon dioxide emissions....Obama was widely expected to use the spotlight on Tuesday night to try to get the public behind the new power plant rules, that are at the core of his climate plan."...

“The EPA does not anticipate that this proposed rule will result in notable CO2 emission changes, energy impacts, monetized benefits, costs, or economic impacts by 2022. The owners of newly built electric generating units will likely choose technologies that meet these standards even in the absence of this proposal due to existing economic conditions as normal business practice. Likewise, the EPA believes this rule will not have any impacts on the price of electricity, employment or labor markets, or the U.S. economy.

As previously stated, the EPA does not anticipate that the power industry will incur compliance costs as a result of this proposal and we do not anticipate any notable CO2 emission changes resulting from the rule. Therefore, there are no direct monetized climate benefits in terms of CO2 emission reductions associated with this rulemaking. However, by clarifying that in the future, new coal-fired power plants will be required to meet a particular performance standard, this rulemaking reduces uncertainty and may enhance the prospects for new coal-fired generation and the deployment of CCS, and thereby promote energy diversity.” (end page 346)

"U.S. carbon-dioxide emissions have fallen dramatically in recent years, in large part because the country is making more electricity with natural gas instead of coal."... 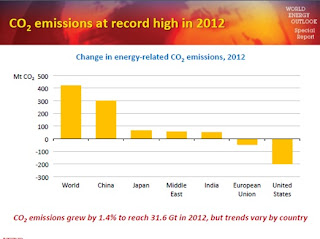 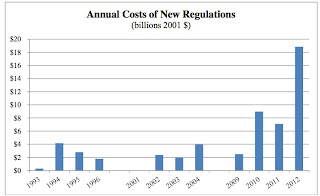 "The vast majority of “laws” governing the United States are not passed by Congress but are issued as regulations."

Suzanne denies or ignores that massive US federal climate "action" to fight human induced global atmospheric change including reduction of CO2
and  transfer of taxpayer money to "solar and renewable energy" has been ongoing since at least 1980 and mandated since 1990:

(b) PURPOSE.--The purpose of this title is to provide for development and coordination of a comprehensive and integrated United States research program which will assist the Nation and the world to understand, assess, predict, and respond to human-induced and natural processes of global change....

The President, through the Council, shall establish a Committee on Earth and Environmental Sciences. The Committee shall carry out Council functions under section 401 of the National Science and Technology Policy, Organization, and Priorities Act of 1976 (42 U.S.C. 6651) relating to global change research, for the purpose of increasing the overall effectiveness and productivity of Federal global change research efforts.

(b) MEMBERSHIP.--The Committee shall consist of at least one representative from--
SEC. 204. GLOBAL CHANGE RESEARCH INFORMATION OFFICE....

Such information shall include, but need not be limited to, results of scientific research and development on technologies useful for...

4. promoting the conservation of forest resources which help reduce the amount of carbon dioxide in the atmosphere;...

A May 2013 CBO report commissioned by Rep. Henry Waxman (D-Ca.) states US on its own has little effect on global climate:

p. 14: "Acting on its own, the United States could have only a modest effect on the amount of warming."

The report says that without significant reductions from countries like China and India (page 14, left column), that further US CO2 reductions:

May 2013 CBO report,"Effects of a Carbon Tax on the Economy and the Environment"

CO2 and the planet clearly aren't the point of the multi-trillion dollar 'climate' industry:

"It makes little sense for advanced countries to take on policies that hurt their own economic growth if environmental benefits are unattainable. Western countries are digging ditches, only to see them filled up by emerging countries following up from behind."...


$1 billion a day was "invested" in the notion of "global warming."