Mayors at White House meeting applaud Obama as he again promises to use 'a pen and a phone' to act outside US law. Only reason Obama can say this is because Boehner, McConnell, and the RNC agree with him on everything, occasional photo-ops otherwise just for show

"President Obama hosted mayors from across the U.S. at the White House Thursday, saying their efforts in cities prove "you don’t have to wait for the gridlock to clear in Congress in order to make things happen."...

"I want to work with Congress whenever and wherever I can, but the one thing I'm emphasizing to all my Cabinet members is we're not going to wait," Obama told the mayors at a reception for the U.S. Conference of Mayors in the East Room at the White House.

"Where Congress is debating things and hasn't been able to pull the trigger on stuff, my administration is going to move forward and we're going to do it in partnership with all of you," Obama said. "I've got a pen and I've got a phone. And that's all I need."...

Obama repeated his pledge that he wouldn't wait for Congress to act, (Sacramento Mayor) Johnson said, saying he'd do "what ever is in my power to make things happen."

Philadelphia Mayor Michael Nutter said he expected cities -- and federal support for them -- will make an appearance in Obama's State of the Union address on Tuesday. "Cities are an example of how to make things work," Nutter said."...

McClatchy doesn't report that after the "pen and a phone" statement many mayors applauded Mr. Obama. "Pen and phone" is at 5:17, applause ends at 5:26: 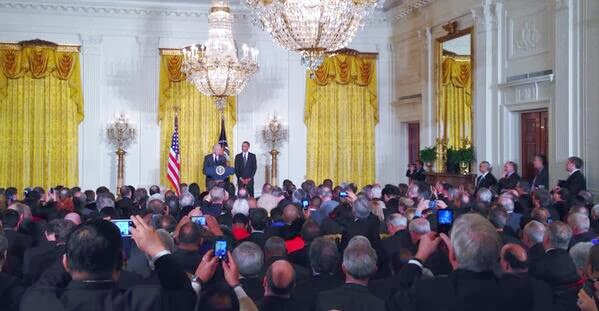 "President Obama told a group of mayors at the White House on Thursday that he’s relying on them to help advance his agenda when Congress won’t act."...via Mark Levin show

By merging with democrats the GOP has achieved its #1 goal which was to silence us:

"So long as the Uniparty exists, mere voters will have no way of affecting what the government does."

"Yet again, for the nth time, Republican Congressional leaders and their Democrat counterparts produced a Trillion dollar, multi-thousand-page spending bill that was voted immediately after being unveiled, without having been read. Republican 2012 vice presidential candidate Paul Ryan authored the latest edition along with Democratic Senator Patti Murray. Republican leader John Boehner preempted Democrats by preemptively accusing Republicans who opposed the bill of wanting to shut down the government. He topped off this feat of leadership by declaring political war on the conservatives who had given Republicans the majority that had made him Speaker of the House – a war that Republican leaders cannot sustain.


The Republican Party’s leaders have functioned as junior members of America’s single ruling party, the UniParty. Acting as the proverbial cockboat in the wake of the Democrats’ man-of-war, they have made Democratic priorities their own when the White House and the Congress were in the hands of Republicans as well as in those of Democrats, and when control has been mixed. The UniParty, the party of government, the party of Ins, continues to consist of the same people. The Outs are always the same people too: American conservatives. They don’t have a party.

Whatever differences exist within the Uniparty, between Republican John Boehner and Democrat Nancy Pelosi, between Republican Mitch McConnell and Democrat Harry Reid, get worked out behind closed doors. Those differences are narrow. The latest negotiations were over some $80 billion out of three trillion dollars in spending. The bipartisan negotiators did not let into the room any of the major issues that concern Americans. Not Obamacare, not racial preferences, not religious liberty, not endless no-win wars. The UniParty is unanimous: more of the same!
.
Hence, so long as the Uniparty exists, mere voters will have no way of affecting what the government does.

Breaking up the Uniparty, means breaking the Democrats’ hold on non-Democrat congressmen and senators. The only way to do that is to break the Republican leadership’s hold on other Republicans and on the Republican label. That in turn requires using the primaries to screen out UniParty people. Doing this is more possible than ever, providing conservatives learn to hang together before they are hanged separately.

No longer do American political parties consist of organizations that pick and run candidates. More and more, candidates present themselves in primaries, organize their own supporters, and raise their own funds, including via direct mail and the internet. Hence, nowadays, party labels are important chiefly to identify candidates as belonging to one side or the other of the great questions of the day.

The Democratic Party has built solid identification between its brand and its substance. Majorities of Democratic voters tell pollsters that they feel well represented by those who bear the label “Democrat.” Hence that label is enough to inspire a gamut of voters on a certain side of American politics to support the candidates who bear it.

Not so the Republicans. Only about a fourth of those who vote Republican feel well represented by Republican officials. Because Republicans roar like lions but lie down like lambs, the label “Republican” does not inspire people on the non-Democrat side of American life to vote for the candidates who bear it.

To vote for a candidate, non-Democrat, i.e. conservative, voters need assurances that the “Republican” label cannot supply. Over the last several decades’ electoral cycles, such voters have increasingly turned to organizations that promote particular issues (the National Taxpayers’ Union, the National Rifle Association, Americans United For Life, etc. and arguably above all, to the Tea Parties) for assurance about substance. As the party’s credibility has gone down, the issue organizations’ importance has risen.

In short, these organizations, not the Republican Party, are the source of legitimacy on the non-Democrat side of American life.

These organizations are the lever by which voters can pry the UniParty apart. Problem is, each organization endorses and supports the candidates most closely aligned with its own particular issue.

They and their candidates compete against one another for funds and for the voters’ attention.

This disunity is as unreasonable as it is dysfunctional. Diverse as are Americans’ reasons for not wishing to be governed by Democrats, nevertheless there is as much commonality on the right side of America’s political spectrum as on the left. Few dispute that the several issue organizations, their different foci notwithstanding, are all “conservative” in some way. The UniParty will endure only so long as the several parts of the conservative movement continue to pull in disparate directions – only so long as the conservatives fail to draw bright, sharp lines between themselves and the UniParty.

Karl Rove, who set up a fund to elect Establishment Republicans, provided clarity by identifying his kind. That all but invited conservatives to identify themselves as the UniParty’s opponents, to explain that the UniParty has brought America to its current sad state, and to show how differently they want to do things. That identification can be made only by the several conservative organizations endorsing and supporting candidates in primaries and beyond.

Candidate Smith, whether for President of the United States or dog catcher, must be able to say: “I am the only candidate who represents those Americans who want smaller government, who want to safeguard human life, who defend the free exercise of religion, the right to keep and bear arms, and who oppose the government’s intrusion into our lives, and I am so certified by the following organizations….My opponent is supported by the Republican Establishment. What do you think that represents? It represents the UniParty!

It is high time for the leaders of the main conservative organizations, together with the most obstreperous Republican elected officials (present and past chairmen of the House Republican Study Committee, Senators Cruz, Paul, Lee, Rubio, etc.) to consider how and on whom to affix the precious joint certification: “conservative.”"