Black Rev. and N. Carolina NAACP Pres. on Dr. King Day singles out blacks not in Dr. King spirit, cites US Sen. Tim Scott whom he termed 'a dummy.' Apparently Rev. Barber knows nothing about Sen. Scott who grew up poor and didn't attend an elite private school in Hawaii 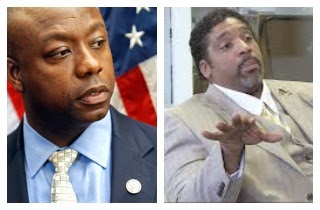 "North Carolina NAACP President Rev. William Barber II courted controversy over the weekend when he called Sen. Tim Scott (R-SC), one of two African-American members of the U.S. Senate, a puppet. Scott recently responded to those comments by saying that he thought it was regrettable for an NAACP official to use the occasion of Martin Luther King Jr. Day weekend to attack a black elected representative.

“A ventriloquist can always find a good dummy,” Barber is quoted as saying of Scott in an extensive profile in the South Carolina outlet The State.


He said “the extreme right wing down here (in South Carolina) finds a black guy to be senator and claims he’s the first black senator since Reconstruction and then he goes to Washington, D.C., and articulates the agenda of the Tea Party.”

“To reflect seriously on the comments a person — a pastor — that is filled with baseless and meaningless rhetoric would be to do a disservice to the very people who have sacrificed so much and paved a way,” Scott told The Daily Caller when asked for comment.

“Instead, I will honor the memory of Dr. King by being proactive in holding the door for others and serving my fellow man,” he continued. “And Rev. Barber will remind me and others of what not to do.”" [Photo via NAACP/AP]

"Barber had special criticism for blacks who he said aren’t following the MLK spirit. That includes black youths who kill each other and others “who wear their pants down to their knees.”

“A ventriloquist can always find a good dummy,” Barber said. He said “the extreme right wing down here (in South Carolina) finds a black guy to be senator and claims he’s the first black senator since Reconstruction and then he goes to Washington, D.C., and articulates the agenda of the Tea Party.”

Columbia resident Ruby James, 73, said she enjoyed Barber. “It was very, very encouraging. He hit all the important points to all of us. It was wonderful.”

Longtime Columbia attorney Steve Hamm, who was in the audience with his wife, Richland 2 superintendent Debbie Hamm, said Barber was a powerful speaker."...

Senator Tim Scott began in elective office in 1995, was elected to the US House of Representatives in 2010 and re-elected in 2012 in a former slave state. He grew up poor, was raised by a single mother, didn't attend an elite private school in Hawaii, and as an adult started his own business and employed people:

"Growing up in North Charleston, he attended a mostly white but desegregated high school and was elected president of the senior class. After graduating from Charleston Southern University in 1988, he went into the insurance business and shortly thereafter hung out his own shingle as Tim Scott Allstate, which grew to 3,000 customers. He was elected to state offices beginning in 1995, then in 2010—the year of the tea party—he ran for Congress and defeated Strom Thurmond's son. In the House, his first act was to sponsor a bill to overturn ObamaCare.

Despite his storybook rise—"I never even imagined being in the United States Senate, it was never part of the plan"—Mr. Scott has felt the personal sting of racism and has had doors shut on him. In high school and college he was bullied and "sometimes I got hate-filled notes with racial slurs attached to my locker."

It was made worse, he recalls, because "I was a kind of an oddball. Had three pair of pants and two pair of shoes. And you know, you rotate them and you got made fun of. I had buck teeth, they were going in two different directions. It was a challenging time." The barriers, he is convinced, "only made my will to succeed even stronger."

The two guiding influences of his life have been his mother, who always worked two jobs ("I'm living her American dream," he says proudly) and the man he calls "my mentor," John Moniz, a white Christian and one of the first franchise owners of Chick-fil-A restaurants. "He took me under his wing and for three or four years he was telling me that as a poor kid in North Charleston, that I could think my way out of poverty. I didn't have to play football. I didn't have to become an entertainer."...

Then he tells a story: "I put together a group of mostly black pastors and thinkers in the new part of my district, near Hilton Head. I told them, 'I don't expect you to vote for me in November. I don't know that you will vote for me ever. But we're going to start a relationship today. And it's not about the election. It's about life. It's about changing the course of history for kids who are coming behind us.' " He notes that one of the pastors in the meeting called him after his appointment to the Senate to celebrate the news."...

“I understand that the NAACP, at its annual conference in Kansas City, will vote today on a resolution condemning the Tea Party movement as “racist”. I believe that the NAACP is making a grave mistake in stereotyping a diverse group of Americans who care deeply about their country and who contribute their time, energy and resources to make a difference.”

“As I campaign in South Carolina, I participate in numerous events sponsored by the Tea Party, 9/12, Patriot, and other like-minded groups, and I have had the opportunity to get to know many of the men and women who make up these energetic grassroots organizations.

Americans need to know that the Tea Party is a color-blind movement that has principled differences with many of the leaders in Washington, both Democrats and Republicans. Their aim is to support the strongest candidates – regardless of color or background – who will fight to return our country to its Constitutional roots of limited government, fiscal responsibility, and free markets.”"

Comment: The Tea Party's original purpose was to call attention to massive corruption in government, that the US is being sold out by the political establishment and media. Obviously, the Tea Party had to be silenced. Calling them racist 24/7 is the best way to do that.