John Kerry must be The Messiah since he was seen in sunsplashed Nantucket waters while simultaneously being in Washington, DC in crisis meetings about Egypt coup over July 4th holiday 2013

"(State Dept. spokesman) Ms Psaki had said: 'Any report or tweet that he was on a boat is completely inaccurate.' His aides even denied Mr Kerry was on a boat when CBS sent them a photo of the Secretary of State on board his yacht."... 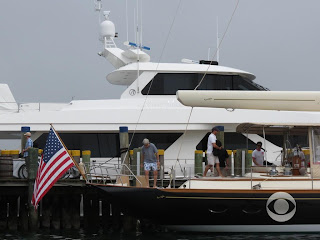 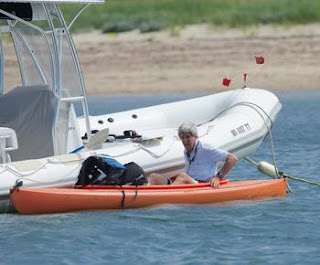 
Secretary of State John F. Kerry paddles a kayak in Nantucket Sound after launching the boat from his home on the island yesterday. - See more at: http://bostonherald.com/news_opinion/local_coverage/2013/07/republicans_put_john_kerry_on_a_plane#sthash.eOtSOqVf.dpuf 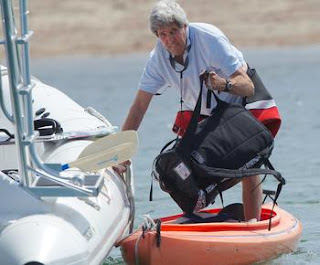 7/5/13, "The pictures that prove Secretary of State John Kerry HAS been out on his boat while Egypt plunges into chaos - after his spokesman denied he had been sailing in Nantucket," UK Daily Mail,J. Jerreat

"With the Egyptian military ousting President Morsi and violent deaths being reported in the country, many people in Nantucket were surprised to see Mr Kerry at his holiday home rather than in Washington....
.
Mr Kerry's unexpected vacation has been charted on Twitter after residents started noting his moves around the town, which could have gone unnoticed if it wasn't for a video allegedly showing his motorcade getting stuck in traffic as he arrived earlier in the week....

An aide to the Secretary of State, who had just returned from a 12-day tour of the Middle East, told the Boston Globe the earlier denial had been a result of 'confusion', and confirmed Mr Kerry had gone sailing with his grandson.

According to Ms Psaki he had spoken to leaders and diplomats in Egypt, Israel, Norway, Qatar and the United Arab Emirates - all while on vacation in Nantucket.

However, an aide said none of the phone calls were made while he was on his yacht, according to ABC News."...

1/14/14, "Israeli Minister: Kerry Should ‘Win A Nobel Prize And Leave Us In Peace’," wuft.org, Krishnadev Calamur

"Comments were made both in private conversations in Israel and in the U.S. It did not provide a date for the alleged remarks."

"It wasn't Israel's mocking of Kerry that was embarrassing: after Syria, Israel is hardly a big fan of Hillary's replacement who brought the Middle East to the verge of a YouTube clip fabricated war, and then promptly slank back to his yacht. It was the spirited White House defense. To wit from Reuters:

The White House on Tuesday denounced reported comments by Israel's defense minister that were sharply critical of U.S. Secretary of State John Kerry.

White House spokesman Jay Carney responded to reports that Israeli military Moshe Yaalon said Kerry's pursuit of Middle East peace is out of an "incomprehensible obsession and a messianic feeling." [Ed. note: The comments were made in private.]

"To question Secretary Kerry's motives and distort his proposals is not something we would expect from the defense minister of a close ally," Carney said.


Well, dear "Jay", while the US is stuck manipulating the stock market in its 5th year of attempting to trickle down the wealth effect, and defending Obama's disastrous insurance ponzi scheme legacy, China (and increasingly Russia) are dividing up the world among them: from Africa, to Syria, to everywhere else, all the while soaking up all the gold that is not nailed down. So by all means - be prepared for more surprises.

As for Kerry's "messianic feeling" - was anyone actually surprised?" via Free Rep.