.
1/18/14, "Manalapan Man Naked When Extracted from Water Facility Pipe, Police Say," "Asaf Mohammad was been transported to the hospital for treatment; he was charged with trespassing." Manalapan Patch, Kristina Rossos, Editor

Asaf Mohammad, 26, of Emily Drive in Manalapan was pulled out of the pipe at around 11 a.m. Friday, Captain Michael Fountain of the Manalapan Police Department said.
An employee of United Water heard someone screaming for help while he was walking the perimeter of the facility shortly after 7 a.m. He, and other employees, were able to pinpoint the screams from within the pipe, Fountain said.

According to police, Mohammad was naked when he was removed from the pipe. Authorities are unsure of how long he was in the pipe, but believe it to be several hours before the employees located him. Once Mohammad was extracted, he was flown by a medical helicopter to Robert Wood Johnson in New Brunswick for treatment. His condition appeared to be non-life threatening, according to Fountain, but hypothermia was a concern.

Police do not know how or why Mohammad entered the United Water facility or how he got inside of the pipe or onto the grounds. He has been charged with trespassing.

Fountain said that there is an officer at the hospital attempting to ascertain more information from Mohammad and detectives still investigating the grounds of the United Water facility in order to determine what precisely happened and to see if additional charges should be filed.

all sent out their confined space rescue teams to the scene, as well.

Manalapan Mayor Jordan Maskowitz sent out an email alert Friday stating that United Water said that the incident does not affect the water quality and water supply to residents." image from Manalapan Patch 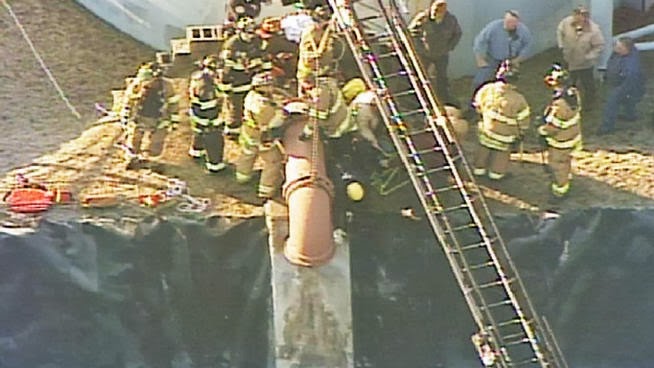 "United Water spokesman Rich Henning said Mohamed broke into the plant that treats and pumps water for the township of Manalapan. Workers heard cries for help coming from the pipe around 7 a.m. Friday.

“This was a person that purposely climbed a six-foot fence with three or four layers of barbed wire on top,” Henning said.

United Water officials said they have no idea why Mohamed did it, but are now looking at ways to tighten up security, Putney reported."...image from nbc new york, 1/17/14, "Trespasser Jumps Fence, Gets Stuck for Hours in Pipe at New Jersey Utility," nbcnewyork,com, Brian Thompson

"A township man who lives a stone’s throw from
the United Water treatment plant got himself lodged headfirst into a vertical 20-inch outflow pipe for at least four hours....Rescue crews had to dismantle the pipe section by section to reach Mohammad, said Ken Genieczko, assistant fire chief and incident commander....Mayor Jordan Maskowitz, who was on scene during the incident, said the rescue was an expensive undertaking and the township will look to recoup the costs.". 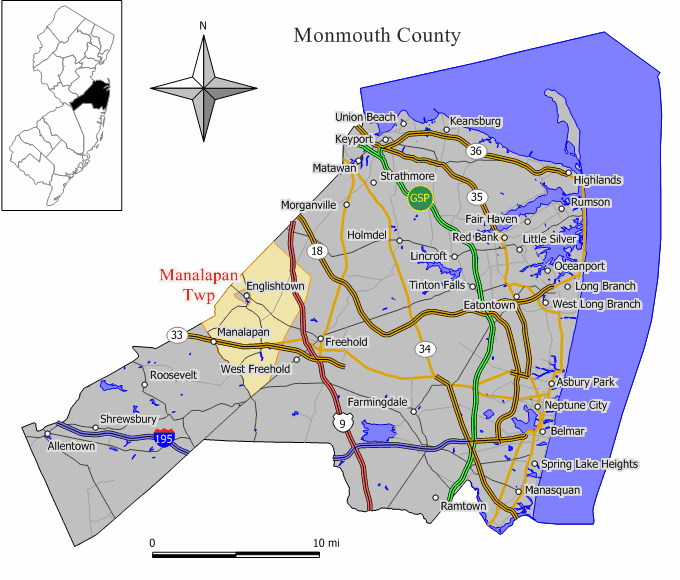 "Located in Western Monmouth County, NJ, Manalapan Township provides the suburban setting that has contributed greatly to its appeal among new residents. The community is just 15 miles from the Jersey Shore and 45 miles southwest of New York City." map, wikipedia