Have bubbly at Davos with CO2 spewing 'carbon bubble' profiteers, 'Sherbet, bubbles, and effervescent conversation' on 'critical issue of the carbon bubble gains traction throughout the Davos meeting,' Carbon Trackers 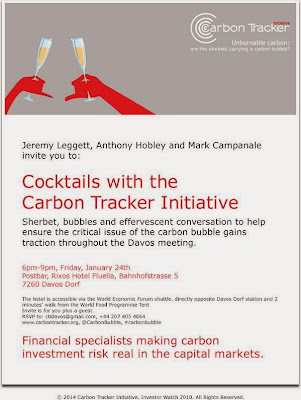 "The Carbon Tracker Initiative – the London-based financial think-tank that has identified the need to prevent a ‘carbon bubble’ becoming the next systemic risk for the financial markets – has announced the appointment of its first CEO.

Anthony Hobley, a London-based Partner at law firm Norton Rose Fulbright, and Global Head of its Sustainability and Climate Change Practice, will formally take the reins on 1st February.

"Concerns about climate exposures and stranded assets are growing within the investment community, and I am keen to build on that momentum,” says Hobley. "Our message is that investors and their advisors have a duty of care to their clients and beneficiaries – and ignoring the climate change issue is putting value at risk.”

The carbon arithmetic has been clear for many years; if dangerous climate change is to be avoided, a large percentage of the world’s fossil fuel reserves will have to remain in the ground.  This challenges the assumptions around demand and price for the fossil fuel commodities produced by the world’s oil, gas and coal mining companies – and therefore around their valuation, creditworthiness and business models.

Yet the capital markets have failed to factor in these risks and exposure continues to grow. In response, Mark Campanale and Nick Robins developed the ‘unburnable carbon/stranded assets’ thesis and, in 2009, Carbon Tracker was set up. Its seminal report, Unburnable Carbon, quantified these exposures at the company and stock market level for the first time.

Carbon Tracker’s thesis has been picked up and developed by financial analysts at HSBC, Citi and Standard & Poor’s, among others, while its work on stranded assets has led to partnering with investors to scrutinise fossil fuel capital expenditure plans. Its latest output – a review of the economic and environmental risks posed by the Keystone XL pipeline – demonstrates the increasing financial analysis capabilities Carbon Tracker will employ....

"In a quarter of a century of work on the climate issue, I have never seen an intervention gain traction so rapidly and deeply as Carbon Tracker's first report did in July 2011,” says chairman Jeremy Leggett, the founder of leading UK solar company Solar Century. "To build on the brilliance of Mark Campanale's game-changing work on carbon-fuel stranded-asset risk, we are thrilled to be joined now by a world-class CEO."...

Hobley has held posts at a number of large international law-firms and was General Counsel at boutique investment bank Climate Change Capital. In addition to his legal career, he has been involved in establishing and leading a number of industry associations, including the Climate Markets & Investment Association, of which he is the current president.

The Carbon Tracker Initiative has been widely recognised for its work in recent years, including by Investment Week, which awarded Carbon Tracker its 2013 Environmental, Ethical, Social & Governance Investment Award for Innovation, and by online publication BusinessGreen, which named it NGO of the Year.

The Carbon Tracker Initiative is a think-tank established by its directors to align the capital markets with efforts to tackle climate change. Carbon Tracker has demonstrated the incompatibility of current capital expenditure plans in the energy sector with delivering emissions reductions to improve air quality and prevent climate change. This was captured in its 2013 report: ‘Unburnable Carbon: Wasted Capital and Stranded Assets’."