"A new study recently published in the Quarterly Journal of the Royal Meteorological Society says robust modeling evidence that the ice should melt (their words) predicted that Antarctic sea ice would decrease in response to increased greenhouse gases and the ozone hole. Only one problem in defiance of the “robust modeling”,  the current Antarctic sea ice has been booming.

This graph from Cryosphere Today via WUWT Sea Ice Reference page shows what I’m talking about: 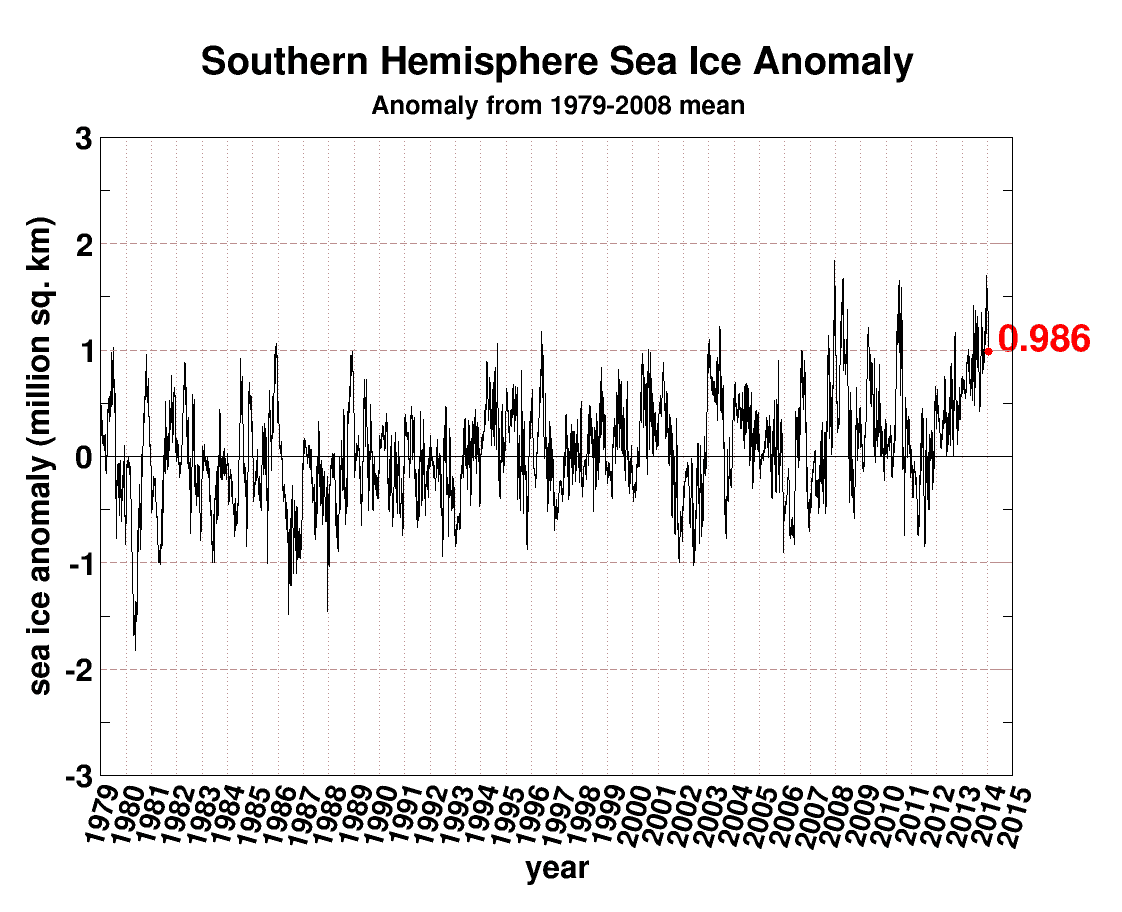 (continuing, WUWT): "Here is the paper title and abstract:

We review what is presently known about the climate system response to stratospheric ozone depletion and its projected recovery, focusing on the responses of the atmosphere, ocean and cryosphere. Compared to well-mixed greenhouse gases (GHGs), the radiative forcing of climate due to observed stratospheric ozone loss is very small: in spite of this, recent trends in stratospheric ozone have caused profound changes in the Southern Hemisphere (SH) climate system, primarily by altering the tropospheric midlatitude jet, which is commonly described as a change in the Southern Annular Mode. Ozone depletion in the late twentieth century was the primary driver of the observed poleward shift of the jet during summer, which has been linked to changes in tropospheric and surface temperatures, clouds and cloud radiative effects, and precipitation at both middle and low latitudes. It is emphasized, however, that not all aspects of the SH climate response to stratospheric ozone forcing can be understood in terms of changes in the midlatitude jet.

The response of the Southern Ocean and sea ice to ozone depletion is currently a matter of debate. For the former, the debate is centered on the role of ocean eddies in possibly opposing wind-driven changes in the mean circulation. For the latter, the issue is reconciling the observed expansion of Antarctic sea ice extent during the satellite era with

robust modeling evidence that the ice should melt as a result of stratospheric ozone depletion (and increases in GHGs).

Despite lingering uncertainties, it has become clear that ozone depletion has been instrumental in driving SH climate change in recent decades. Similarly, ozone recovery will figure prominently in future climate change, with its impacts expected to largely cancel the impacts of increasing GHGs during the next half-century." via commenter at Sunshine Hours