"China told foreign embassies Tuesday to stop publishing their own reports on air quality in the country, escalating its objections to a popular U.S. Embassy Twitter feed that tracks pollution in smoggy Beijing.

"China has made ample supplies [of rare earths minerals] available to manufacturers within China that produce crucial components for a host of products like laptop computers, compact fluorescent bulbs, wind turbines and electric cars. Some Western and Japanese companies have moved factories to China to make sure that they have access to rare earths. ...

In Guangdong province in southeastern China, regulators are struggling to repair rice fields and streams destroyed by powerful acids and other runoff from open-pit rare earth mines that are often run by violent organized crime syndicates....

In a white paper issued in June last year, China’s cabinet described at length the environmental harm caused by the rare earth industry, an admission that although embarrassing for Beijing may have buttressed its case at the W.T.O. that the rare earth industry is a dirty business for which export restrictions are justified. “Excessive rare earth mining has resulted in landslides, clogged rivers, environmental pollution emergencies and even major accidents and disasters, causing great damage to people’s safety and health and the ecological environment,” the white paper said.


Chinese officials have repeatedly denied that their newfound concerns for the environmental consequences of rare earth mining and refining are driven by a desire to help avoid defeat at the W.T.O., although the cleanup could help on that.
Whole villages between the city of Baotou and the Yellow River in Inner Mongolia have been evacuated and resettled to apartment towers elsewhere after reports of high cancer rates and other health problems associated with the numerous rare earth refineries there.

The most hazardous refineries are those that crack the tight chemical bonds that tie rare earths found in mineral ores to a variety of hazardous materials, notably radioactive thorium....A hazardous stew of toxic chemicals and low-level radioactive waste is left behind....


On orders from Beijing, state-controlled enterprises have dismantled Baotou refineries and rebuilt them at an enormous mining complex at Bayan Obo in the Gobi Desert, which mines about half the world’s rare earths. Chinese state-controlled media have reported that tens of thousands of goats and other livestock there have died and many baby goats have been born severely deformed, possibly because of radioactive contamination from the rare earth industry....

In 2012 Obama said China should give the US a better deal on rare earths minerals so Americans could have "a fair shot in the global economy" which shocked China since Obama portrays himself as pro-environment:

"US President Barack Obama announced on Tuesday that the United States, joined by Japan and the European Union, has filed complaints with the World Trade Organization over China's rare earth export quotas.

He said this as an effort to give "American workers and American businesses a fair shot in the global economy".

His words, however, imply that he does not really care about the environmental degradation caused by China's disorderly and excessive mining of rare earth materials, as long as US workers and businesses can profit from China's cheap supply.
This is shocking for a president who likes to portray himself as pro-environment."...
Countries such as the US, Canada and Australia, which used to produce rare earth minerals, stopped such manufacturing a decade ago due to the environmental concerns and the higher cost compared with Chinese exports....
According to the US Geological Survey, there are about 13 million metric tons of rare earth deposits in the US. Instead of buying from China, Obama should propose tapping the US' own deposits. Such a move would not only enable the US to share the responsibility for the supply of rare earth materials, it would also create jobs for Americans."... 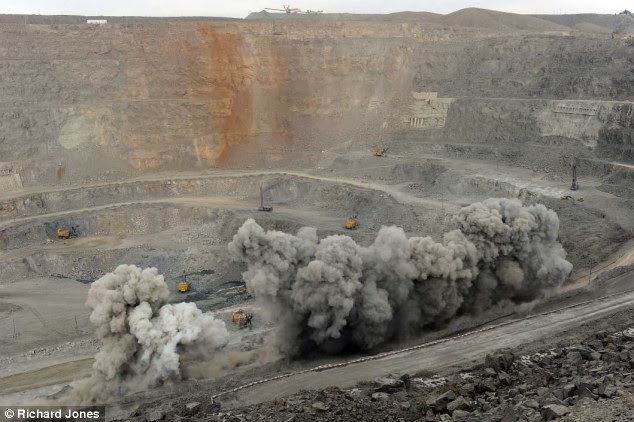 1/10/10, "Explosives tear down yet more rock in the vast Baiyun Obo mine." UK Daily Mail 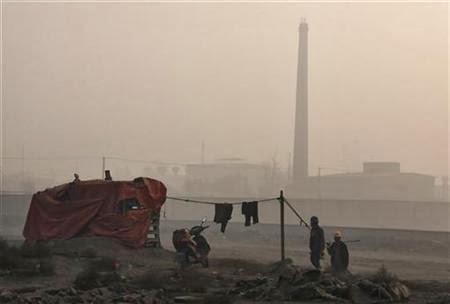 10/31/10, "Workers walk through thick haze in front of a rare earth smelting plant next to a vast tailings dam near Xinguang Village, located on the outskirts of the city of Baotou in China's Inner Mongolia Autonomous Region October 31, 2010." reuters, gray