Neither EPA nor UN IPCC can provide data to back up Pres. Obama's repeated claim that 'the temperature around the globe is increasing faster than was predicted even 10 years ago' and that 'the climate is warming faster than anybody anticipated 5 or 10 years ago.' US Senate hearing, 1/16/14

"Both statements are false," Sen. Inhofe said of Obama's global warming claims, since neither the EPA nor the U.N. IPCC climate group can provide any supporting statistics: [video:1]

"On multiple occasions, and most recently on May 30th of last year, President Obama has said, and this is a quote he has used several times, he said that 'the temperature around the globe is increasing faster than was predicted even ten years ago' and that 'the climate is warming faster than anybody anticipated five or ten years ago.'

"Both statements are false, and through letters to you, Ms. McCarthy, and on the record in this Committee, we've asked the EPA to provide us with the data backing up these two statements, the two statements made by the president, but they don't have any data and referred us to the UN IPCC. And, their scientists, apparently, the EPA thought they were the source of this.

"Well, we went there and they had nothing to back it up, so apparently the president just made that up.

"And, I think that's very important because, when you get statements that are made, they're supposed to be logic and on truth, you have to check them out.

"Last week's record cold temperature brought the global warming debate back to the public's attention, but that's only important to the extent that it's bringing more awareness to the uncertainty of the science around the debate."

"The truth completely contradicts the president's statements," Sen. Inhofe said, noting that temperatures have "flat-lined" over the last 15 years - something no climate model used to promote global warming theory ever predicted:

"When you go back and look at the at look at the temperature projections from climate models and compare them to actual temperatures, two things are readily evident: first, temperatures have flat-lined over the last fifteen years; and second, an average of over 100 climate models from the last decade shows that the scientific community did not predict this would happen.

And to my knowledge, not a single climate model ever predicted that a pause in global warming would ever occur. Senator Sessions is going to go deeper into this.

"The truth completely contradicts the president's statements and begs the question why he and the EPA not only continue to deny the truth but why it has raced to stop this information from disseminating into the scientific record.""


“The cut of almost half in the IPCC’s best estimate of near-term warming between the pre-final and final drafts of its Fifth Assessment Report signals the IPCC’s abandonment of the models.” 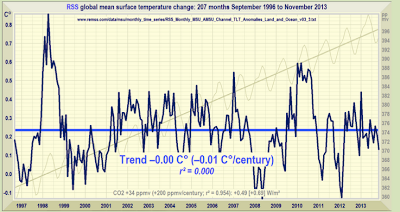 Email ThisBlogThis!Share to TwitterShare to FacebookShare to Pinterest
Labels: Neither EPA nor UN IPCC can back up Pres. Obama's climate scare statements