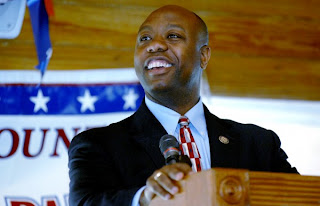 "South Carolina Gov. Nikki Haley (R) will announce Monday that she will appoint Rep. Tim Scott (R-S.C.) to the Senate....Scott, 47, will replace Sen. Jim DeMint (R-S.C.), who is leaving the chamber in January."...

“I understand that the NAACP, at its annual conference in Kansas City, will vote today on a resolution condemning the Tea Party movement as “racist”. I believe that the NAACP is making a grave mistake in stereotyping a diverse group of Americans who care deeply about their country and who contribute their time, energy and resources to make a difference.”

“As I campaign in South Carolina, I participate in numerous events sponsored by the Tea Party, 9/12, Patriot, and other like-minded groups, and I have had the opportunity to get to know many of the men and women who make up these energetic grassroots organizations.

Americans need to know that the Tea Party is a color-blind movement that has principled differences with many of the leaders in Washington, both Democrats and Republicans. Their aim is to support the strongest candidates – regardless of color or background – who will fight to return our country to its Constitutional roots of limited government, fiscal responsibility, and free markets.”"

Blacks are viciously attacked today if they're not democrats. Predictable racist commenter about Tim Scott's move from House to Senate:


Tim Scott is simply another right-wing, homophobic, Bible-thumping Republican. His color is the reason he was chosen but make no mistake – his heart is all about the intolerant evil the American people have grown to reject. Republicans never learn. He's like a black Sarah Palin – chosen for all of the wrong reasons."

Ed. note: Assuming commenter is correct about why Tim Scott "was chosen," where is his proof that the DNC didn't "chose" Obama to speak at their 2004 convention for the same "reason?"

"Governor Nikki Haley said in a press conference that “this is a new day” as she appointed Tim Scott as the next senator from South Carolina to fill Jim DeMint’s spot. Haley spoke of Scott’s help in the fight against unions and focused on his pro-business bona fides: ”He understands the strength that we need to have in our business community as we continue to focus on jobs,” said Haley. She also stressed that Congressman Scott earned his seat.

Upon taking the podium Scott first asked the audience to join him in a moment of silence for those mourning in Connecticut and then gave thanks to Jesus Christ: “Our nation finds itself in a position where we need some backbone…we have a spending problem, ladies and gentlemen, and not a revenue problem.”"...