"State scientists, grappling with an explosion of marijuana growing on the North Coast, recently studied aerial imagery of a small tributary of the Eel River, spawning grounds for endangered coho salmon and other threatened fish.

In the remote, 37-square-mile patch of forest, they counted 281 outdoor pot farms and 286 greenhouses, containing an estimated 20,000 plants — mostly fed by water diverted from creeks or a fork of the Eel. The scientists determined the farms were siphoning roughly 18 million gallons from the watershed every year, largely at the time when the salmon most need it.

"That is just one small watershed," said Scott Bauer, the state scientist in charge of the coho recovery on the North Coast for the Department of Fish and Game. "You extrapolate that for all the other tributaries, just of the Eel, and you get a lot of marijuana sucking up a lot of water.… This threatens species we are spending millions of dollars to recover."...

The marijuana boom that came with the sudden rise of medical cannabis in California has wreaked havoc on the fragile habitats of the North Coast and other parts of California. With little or no oversight, farmers have illegally mowed down timber, graded mountaintops flat for sprawling greenhouses, dispersed poisons and pesticides,

Because marijuana is unregulated in California and illegal under federal law, most growers still operate in the shadows, and scientists have little hard data on their collective effect. But they are getting ever more ugly snapshots.

A study led by researchers at UC Davis found that a rare forest carnivore called a fisher was being poisoned in Humboldt County and near Yosemite in the Sierra Nevada....

Mark Higley, a wildlife biologist on the Hoopa Indian Reservation in eastern Humboldt who worked on the study, is incredulous over the poisons that growers are bringing in.

"Carbofuran," he said. "It seems like they're using that to kill bears and things like that that raid their camps. So they mix it up with tuna or sardine, and the bears eat that and die."

The insecticide is lethal to humans in small doses, requires a special permit from the EPA and is banned in other countries. Authorities are now regularly finding it at large-scale operations in some of California's most sensitive ecosystems.

It is just one in a litany of pollutants seeping into the watershed from pot farms: fertilizers, soil amendments, miticides, rodenticides, fungicides, plant hormones,

Scientists suspect that nutrient runoff from excess potting soil and fertilizers, combined with lower-than-normal river flow due to diversions, has caused a rash of toxic blue-green algae blooms in the North Coast rivers over the last decade.

The cyanobacteria outbreaks threaten public health for swimmers and kill aquatic invertebrates that salmon and steelhead trout eat. Now, officials warn residents in late summer and fall to stay out of certain stretches of water and keep their dogs out.

Eleven dogs have died from ingesting the floating algae since 2001.

The effects are disheartening to many locals because healthier salmon runs were signaling that the rivers were gradually improving from the damage caused by more than a century of logging.

"Now with these water diversions, we're potentially slamming the door on salmon recovery," said Scott Greacen, director of Friends of the Eel River.

In June, Bauer and other agency scientists accompanied game wardens as they executed six search warrants on growers illegally sucking water from tributaries of the Trinity River. At one, he came upon a group of 20-somethings with Michigan license plates on their vehicles, camping next to 400 plants. He followed an irrigation line up to a creek, where the growers had dug a pond and lined it with plastic.

"I started talking to this guy, and he says he used to be an Earth First! tree-sitter, saving the trees," Bauer said. "I told him everything he was doing here negates everything he did as an environmentalist."

The man was a small-timer in this new gold rush. As marijuana floods the market and prices drop, many farmers are cultivating ever bigger crops to make a profit. They now cut huge clearings for industrial-scale greenhouses. With no permits or provisions for runoff, the operations

dump tons of silt into the streams during the rainy season.

Scanning Google Earth in his office recently, Bauer came upon a "mega grow" that did not exist the year before — a 4-acre bald spot in the forest with 42 greenhouses, each 100 feet long.

Figuring a single greenhouse that size would hold 80 plants, and each plant uses about 5 gallons of water a day, he estimated the operation would consume 2 million gallons of water in the dry season and unleash a torrent of sediment in the wet season.

"There has been an explosion of this in the last two years," he said. "We can't keep up with it."

Every grow has its own unique footprint. Some farmers on private land avoid pesticides and poisons, get their water legally, keep their crops small and try to minimize their runoff. Urban indoor growers might not pollute a river, but they guzzle energy. A study in the journal Energy Policy calculated that indoor marijuana cultivation could be responsible for 9% of California's household electricity use. Other producers, like the Mexican drug trafficking groups who set up giant grows on public lands right next to mountain streams, spread toxins far and wide and steal enough water to run oscillating sprinkler systems.

But it's not just the big criminal groups skirting the rules. Tony LaBanca, senior environmental scientist at Fish and Game in Eureka, said less than 1% of marijuana growers get the permits required to take water from a creek, and those who do usually do it after an enforcement action.

Responsible growers could easily get permits, with no questions asked about what type of plant they're watering, LaBanca said. They just need to be set up to take their water in the wet season and store it in tanks and bladders.

Fish and Game wants to step up enforcement, but the staff is overwhelmed, he said. The agency has 12 scientists and 15 game wardens in the entire four counties on the North Coast, covering thousands of mountainous square miles.

Until the last few years, dealing with marijuana cultivation was usually a minor issue. Now, LaBanca said, it is "triage."...

Deputies had severed the irrigation lines during the August raid, but when Higley returned in September to study the environmental impact, some of the line had been reconnected to sprinklers and plants had re-sprouted. He saw a wet bar of soap on an upturned bucket and realized workers were hiding nearby.

On this return visit, the site was empty, and he started picking through the rubbish. "That's d-CON rat poison right there, 16 trays."

At a dump pile next to the creek, he found propane tanks, more rat poison, cans of El Pato tomato sauce, and empty bags of Grow More fertilizer, instant noodles and tortillas.

A lot of the trash had been removed during the sheriff's eradication — dozens of empty bags accounting for 2,700 pounds of fertilizer and boxes for 10 pounds of d-CON (enough to kill 21 spotted owls and up to 28 fishers), as well as two poached deer carcasses and the remains of a state-protected ringtailed cat.

"It wouldn't matter if they were growing tomatoes, corn and squash," he said. "It's trespassing, it's illegal and it borders on terrorism to the environment."" via Free Republic 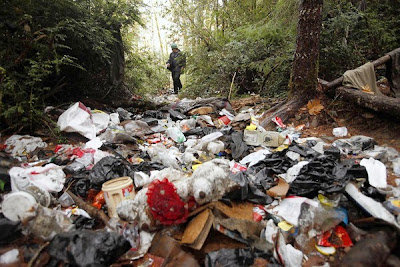