There are simply no words appropriate to describe the tragedy at Sandy Hook.  As a father to two young daughters I can't help but ask, "What if it were my daughters?" I am sending you this email because there are experiences and lessons I learned while working with the Secret Service that may help assist in preventing another tragedy.

In 2002, the Secret Service, in conjunction with the Department of Education, conducted a research study on school shooting incidents called the Safe School Initiative. The study sought information about the shooters' pre-attack behaviors and communications. Their stated goal was to "identify information about a school shooting that may be identifiable or noticeable before the shooting occurs, to help inform efforts to prevent school-based attacks." Although this email is not an appropriate forum for an exhaustive list of their conclusions I have highlighted a few of the study's main conclusions below with a link to the complete report at the bottom.

According to the Secret Service website, the study highlights include the following:


You can view the report at http://www.secretservice.gov/ntac/ssi_final_report.pdf.

Ed. note: I received the above via email. I'm on Dan Bongino's email list. Dan is one of two or three 2012 candidates to whom I contributed the maximum amount allowed by law. I posted the following about him on 9/30/12: 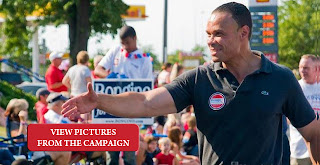 "This was my first donation to Mr. Bongino and only a few hundred dollars, but a few minutes after making the donation my phone rang and a voice said, "Hi, this is Dan Bongino." I couldn't believe what I was hearing, then I thought it might be a robo-call, but it wasn't, it was actually Dan Bongino himself! He sounded terrific. Then I read at Legal Insurrection and its comments that the establishment GOP isn't giving him money because they don't think his chances are good. Hopefully this is no longer the case but I don't waste time wondering about the GOP establishment. In any case, I will probably be giving Mr. Bongino the maximum allowed by law. Go Dan! Photo above from the candidate's website."

Here is more about Dan from Legal Insurrection:

Ed. note: The establishment GOP isn't fit to shine Dan Bongino's shoes. They're not fit to shine the shoes of any of the wonderful candidates I contributed to this year.