"They built from the grassroots, bottom up"...

"From outside Michigan Republican circles, it appeared that the Republican drive to weaken unions came out of the blue – proposed, passed and signed in a mere six days.

But the transformation had been in the making since March 2011 when Colbeck and a fellow freshman, state Representative Mike Shirkey, first seriously considered legislation to ban mandatory collection of union dues as a condition of employment in Michigan. Such was their zeal, they even went to union halls to make their pitch and were treated “respectfully,” Colbeck said.

The upstarts were flirting with the once unthinkable, limiting union rights in a state that is the home of the heavily unionized U.S. auto industry and the birthplace of the nation’s richest union, the United Auto Workers….

They built from the grassroots, bottom up, rather than from Snyder and top leaders in the legislature. If anything, Michigan Senate Majority Leader Randy Richardville was viewed as an obstacle because he represents a labor-friendly area."...

Below, Michigan Union thug's shirt features a picture of a fist. 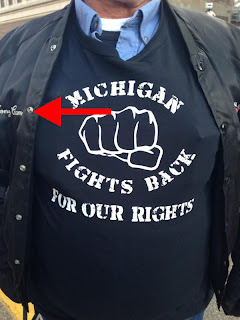 
via Free Republic
Posted by susan at 2:17 PM