'Arrogant, clueless' Obama warns UK to cleave unto EU parasites and kleptocrats, 'parrots EU propaganda.' In 2010 Biden told EU that they were like US Congress and more, were 'capital of the free world'

"The White House is warning the British government against leaving the European Union, claiming this would weaken Britain’s standing on the world stage, and thereby London’s relationship with Washington. As The Telegraph’s Alex Spillius reports:

The Obama administration has expressed concern at what US officials see as Britain's slide towards the European exit door. Washington firmly believes that the departure of its strongest partner in Europe would also reduce American influence on the continent, as Britain so often shares American views. An EU without Britain would be seen as weaker on free trade and less reliable on defence and foreign policy issues.

According to The Telegraph report, President Obama himself has personally raised the issue with David Cameron, and an official with the White House’s National Security Council has conveyed the same message to Downing Street and the Foreign Office: With David Cameron now saying a Britain out of Europe was now "imaginable", US agitation has reached a new high.

After observing the rise in popularity of Ukip [right of center UK political party] and the rise of anti-European sentiment generally, the issue was raised by President Barack Obama in a video-conference call with the Prime Minister on Tuesday. It was also high on the agenda of a visit by a US national security council official to Downing Street and the Foreign Office earlier this week. "It is important to state very clearly that a strong UK in a strong Europe is in America's national interest," said a senior US administration official. "We recognise national states but see the EU as a force multiplier."

The White House is perplexed by the view held by some Euro-sceptics that the so-called Special Relationship would be enhanced by a British exit, because it believes Britain would have more clout as a full partner of the European club.

Barack Obama’s extraordinarily arrogant and clueless direct intervention in the internal affairs of Great Britain echoes the remarks of his Ambassador to London, Louis Susman, who told a private meeting of British MPs back in January 2011 that “the UK needs to remain in the EU,” and “all key issues must run through Europe.” It also reflects a deep-seated vein of support for European integration that runs through the State Department and the upper echelons of the Obama administration, which sees the preservation of the European Project as vital to US interests.

Vice President Joe Biden ludicrously referred to Brussels as “the capital of the free world” in a visit to Belgium in 2010, and heaped praise upon the European Parliament as “the bastion of European democracy,” comparing it to the United States Congress:


Let me state it as plainly as I can: The Obama-Biden administration has no doubt about the need for and strongly supports a vibrant European Union. We believe it's absolutely essential to American prosperity and long-term security. So have no doubt about that.

British policy on Europe is frankly none of Washington’s business. Barack Obama and Joe Biden are an irrelevance when it comes to Britain’s decision on whether or not to remain in the European Union. The White House’s silly attempt to intervene on such a highly sensitive matter for the British electorate may please Downing Street, but it certainly won’t play well in Middle England. President Obama’s views on the EU are as relevant to British voters as the futile ranting of Herman Van Rompuy or Jose Manuel Barroso, and will only serve to reinforce the determination of millions of Britons to throw off the shackles of Brussels.

It is rather sad to see Washington parroting the propaganda of the European Commission. It should know better. After all, the polls are very clear. The British public is moving in only one direction – towards support for a British exit from the EU and complete national sovereignty in Europe. Barack Obama is standing on the wrong side of history on this issue, and is hugely out of touch with British public opinion.

President Obama is also completely wrong in suggesting that Britain’s position as a global power will be eroded if it departs the European Union. British trade outside the EU is now larger than trade with the EU, and that figure will only grow larger. And as for the alliance with the United States, the greatest threat today to the Special Relationship and the transatlantic alliance is posed by the tentacles of European integration, including the Common Foreign and Security Policy and the Common Security and Defense Policy.

The European Project is not in Britain’s interests – nor is it in America’s. It is time the Obama administration woke up to this reality, and stood on the side of freedom and sovereignty in Europe, instead of backing a fundamentally undemocratic and unaccountable European Project." via Lucianne 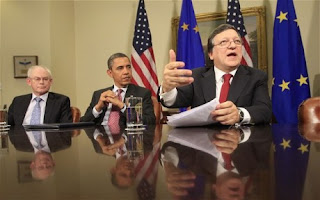 The EU is into profiteering via global warming terror.