"The mayor also takes along a police detail when he travels, flying two officers on his private plane and paying as much as $400 a night to put them up at a hotel near his house; the city pays their wages while they are there, as it does whether Mr. Bloomberg is New York or not. Guns are largely forbidden in Bermuda — even most police officers do not use them — but the mayor’s guards have special permission to carry weapons. A spokesman for the Police Department declined to comment....

Mr. Bloomberg often eats with members of his security detail. At Rustico, his favorite Italian restaurant in Bermuda, he stakes out an outdoor table for six and orders platters of herb-marinated chicken, tenderloin of beef and fresh orecchiette....

An architectural drawing of the mayor's house in Bermuda. His new neighbors did not approve of plans for the property. Even by Bermudan standards, it was flashy: five balconies, four bedrooms, seven bathrooms, an in-ground pool and space for four cars, all hidden by a gated driveway, according to documents on file with the Bermuda Department of Planning....

Mr. Bloomberg's Bermudan estate, called Stokes Bay. When he bought the property, he had a 2,620-square-foot house demolished, and he commissioned a local architect to replace it with a $10 million home nearly three times its size....

A letter from the property committee of the Mid Ocean club complaining about the size of the proposed Bloomberg house. The committee said it was too large and would obliterate the views for nearby residents. Mr. Bloomberg's architect agreed to shave three feet off the height of the house and to abandon plans for a large dock in front of the house....

At times, though, his attempts at privacy border on the extreme. Shortly after Mr. Bloomberg was elected mayor, he requested that the Bermudan government seal all of his housing records, according to a letter from his architect. The government refused. Since then, the mayor’s gardeners have stopped trimming the vegetation around his house. It has grown several feet taller and now largely blocks the viewfrom the water. (The downside: it obstructs the mayor’s view.)"...via 4/12/12, "Bloomberg reeks of hypocrisy on ‘stand your ground’ laws," Examiner.com, D. Codrea 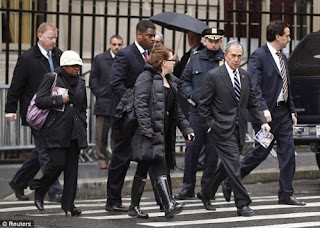 
"Mr. Mayor, your citizen disarmament is an act of hypocrisy. Unlike nearly all the rest of us, everywhere you go you are surrounded by official armed guards, police escorts, and your highly trained personal private bodyguards. (See adjacent photo). Mr. Mayor, is your life worth more than the lives of your fellow citizens?

Tyrants like Lenin, Hitler, Stalin, and Mao “pioneered” the bloody trail of “gun control” in the 20th Century. Why do you so thoughtlessly, in effect, mimic the insidious actions of these monsters?

This apparent elitism on your part makes your recent publicity stunt in Arizona even more cynical. You sent NYPD agents all the way across the country to purchase guns -- but you can't deploy enough police to protect your own City residents?

And if you expose your city’s residents via such a manpower diversion, how do you justify denying these residents the right to protect themselves with a firearm?

Mr. Mayor, do you need a rabbi to tell you that your actions are wrong and immoral?

This nation’s Bill of Rights is a sacrosanct public trust. You are a public servant. You swore an oath to uphold the Constitution. As you blatantly disregard the Second Amendment, the actual “Guardian” of all the rest of the Bill of Rights, I must ask you: Did you knowingly lie when you took your oath of office?"

"It must be nice for someone who has the luxury of bodyguards to tell the rest of us we are not allowed to have the means to defend ourselves.

“It’s time for the president, I think, to stand up and lead and tell this country what we should do, not go to Congress and say what you guys want to do,” Bloomberg said on NBC’s “Meet the Press.” ...

Chicago, with about one-quarter the population of NYC is worse. By October, 400 people were murdered in Chicago. Chicago has very strict gun laws."...

Bloomberg takes the subway with bodyguards:

"He (Bloomberg) has a 20-acre farm in North Salem, NY, a Victorian townhouse in London, and a condominium in Vail, Colorado. He is a private pilot with a fleet of aircraft at his disposal. Yet, ever to be practical and demonstrate that at some level he is still one of us plain folk, he continues to take the subway every morning to City Hall (albeit with bodyguards)."....

Det. Leopold McLean, a 17-year veteran on the force, was released on bail after his arraignment on charges of second-degree attempted murder, first-degree criminal use of a firearm, first- and second-degree..." (subscrip.)