Romm won't acknowledge science of US CO2 drop, that US CO2 is no longer a danger, that he won and it's over. Romm wants US CO2 tax as world signal that US might sign UN global CO2 treaty permanently binding US taxpayers to unelected, unaccountable UN jet setters

.
Global Warming "action" was institutionalized in US government in 1990 by George Bush the 1st. $68 billion has been spent on 'climate' just in the past 4 yrs. 13 federal agencies remain tasked with climate "action."

Think Progess, Romm: "Any tax in the $15 to $25 a ton of CO2 range (together with other policies already enacted, such as the fuel economy standards)

That 17% cut was Obama’s pledge going into the Copenhagen climate talks.*** I think that any such

U.S. carbon tax would have a

Indeed I imagine a significant fraction of the nations of the world would probably seriously consider adopting whatever carbon tax the United States adopts....

For those who want to become more knowledgeable about the ins and outs of a carbon tax, Brookings, AEI, the IMF, and Resources for the Future are sponsoring an all day forum on it Tuesday. You can watch it live here. Climate Progress will be covering it."

***Romm denies current science, says CO2 tax would help US meet Obama Copenhagen pledge when already "US CO2 emissions are falling even faster than what President Obama pledged in the global Copenhagen Accord:”… 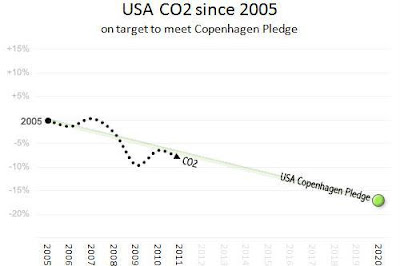 Romm should celebrate the success of his efforts to lower US CO2. More on his stunning achievement:

“In a surprising turnaround, the amount of carbon dioxide being released into the atmosphere in the U.S. has fallen dramatically to its lowest level in 20 years, and government officials say the biggest reason is that cheap and plentiful natural gas has led many power plant operators to switch from dirtier-burning coal.

Many of the world’s leading climate scientists didn’t see the drop coming, in large part because it happened as a result of market forces rather than direct government action against carbon dioxide, a greenhouse gas that traps heat in the atmosphere.

Michael Mann, director of the Earth System Science Center at Penn State University, said the shift away from coal is reason for “cautious optimism” about potential ways to deal with climate change….

In a little-noticed technical report, the U.S. Energy Information Agency, a part of the Energy Department, said this month that energy related U.S. CO2 emissions for the first four months of this year fell to about 1992 levels. Energy emissions make up about 98 percent of the total. The Associated Press contacted environmental experts, scientists and utility companies and learned that

virtually everyone believes the shift could have major long-term implications for U.S. energy policy.”…

4/21/12, "Why [CO2] Emissions Are Declining in the U.S. But Not in Europe," by Michael Shellenberger and Ted Nordhaus, newgeography.com

"As we note below in a new article for Yale360, a funny thing happened: U.S. emissions started going down in 2005 and are expected to decline further over the next decade."

commenter to Think Progress warns against relying on Norquist for anything:

"You’re right, Merrelyn. Norquist is not a good person, and is the wrong man to negotiate with- especially since he does not have a real position of authority. Norquist’s calling card is to act as a

spokesman for far right plutocrats, which somehow got twisted

by the right wing press into being presented

as some kind of gravitas
.
His only legitimate claim to fame is the drowning in the bathtub line, but knowing Grover, he probably stole it from someone."...

Thanks to Romm's call for action on CO2:

In Nov., 2012, Obama took 'climate action' by giving $6 billion US taxpayer dollars to the Sultan of Brunei who owns 5000+ cars and to the Pres. of Indonesia, a country so corrupt even the World Bank says crime adds 20% to costs. Below, one of the Sultan's cars: 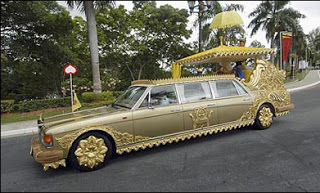 "The White House announced the federal government will spend $6 billion over four years for a “sustainable energy future” plan with Asian countries that involves loaning tax dollars to other countries to increase their purchasing power for U.S. technology, services and equipment.

“Recognizing that energy and the environment are among the most pressing issues confronting our region, President Obama, in partnership with Sultan Haji Hassanal Bolkiah of Brunei and President of the Republic of Indonesia Susilo Bambang Yudhoyono, today proposed the U.S.-Asia Pacific Comprehensive Partnership for a Sustainable Energy Future,” the White House announced Tuesday as Obama visits Asian Pacific countries."...

"A World Bank analysis found corruption could add up to 20 percent to the existing costs of projects in Indonesia.

President Susilo Bambang Yudhoyono has won two elections on promises to tackle graft in one of the most corrupt countries in Asia, but critics say he has failed to make any genuine difference to the culture of graft and impunity.

A Gallup poll released in October found that 91 percent of Indonesians believe corruption in government is widespread, compared to 84 percent in 2006. ...“Here in Indonesia, it is a common practice for businessmen to bribe officials to get a project,” Adiningsih said....

“It’s common for corruption to happen at all stages in Indonesian infrastructure projects, whether it’s during the tender process or extortion along the way.”...