.
NBC News doesn't mention Trump or Republicans in its headline. Scroll down to second half of article for Trump news.

"Trump ahead in both Iowa and New Hampshire" (subhead, scroll down).

"Meanwhile, in the Republican presidential race, Donald Trump now holds a seven-point lead in Iowa and a 16-point one in New Hampshire.

In the Hawkeye State, Trump gets the support from 29 percent of potential GOP caucus-goers, while Ben Carson receives 22 percent. There's a steep drop off after that: Jeb Bush gets 6 percent; Carly Fiorina, Rand Paul and Scott Walker get 5 percent; and Ted Cruz, Marco Rubio and Bobby Jindal are at 4 percent.

In July, Walker was ahead of the Iowa Republican field at 19 percent, Trump was second at 17 percent and Bush was third at 12 percent.

In the Granite State, Trump is at 28 percent — followed by John Kasich at 12 percent, Carson at 11 percent, Bush at 8 percent and Fiorina at 6 percent; Walker is down to 4 percent. 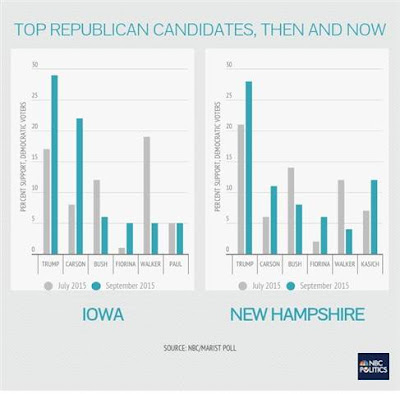 "Kasich has built a strong foundation in New Hampshire. A super political action committee, or super PAC, has spent millions of dollars to promote him on television there. And he visits frequently. Kasich held several town hall-style forums there last week and will return Monday for a two-day swing that includes a Labor Day parade and house party hosted by former U.S. Sen. Scott Brown.

When NBC News/Marist last checked in on New Hampshire, Kasich had climbed to fourth, behind Trump, Bush and Walker. Since then other polls have shown him surpassing Bush, who is about to hit the state's airwaves with a $500,000 ad buy.

The latest poll of New Hampshire Republicans has a margin of error of 4.8 points."...