We Be Sisters stump for Trump and say, we don't need another meek, soft spoken president

.
9/3/15, "Donald Trump is still Leading Nationally...but the media needs to stop playing games," We Be Sisters, Diamond and Silk

Trump beats both Hillary and Biden in new national poll:

31% of Hispanics would vote for Trump over Clinton.(chart posted below).

9/4/15, "Labor Day Look at the 2016 General Election For President: Every Democrat Trails Trump, Though Narrowly:" SurveyUSA

Among a subset of registered voters who tell SurveyUSA that they pay "a lot" of attention to politics, the scale tilts to the right: Today it's:

Voters were asked, regardless of whether they were Democrats or Republicans, and regardless of whom they might vote for in a primary, who they thought would be the major party nominees. Today, Labor Day, voters handicap the primary contests this way:

44% say Clinton will be the Democratic Party nominee.

Race splits, Trump v Clinton, 31% of Hispanics would vote for Trump over Clinton: 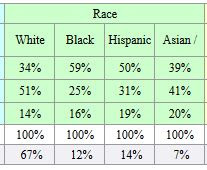