Weapons supplied by the US taxpayer are being used by Islamic savages for genocide against peaceful people. "It was ironic that the Islamic State had captured millions of dollars worth of modern U.S. weaponry as its forces overran Iraqi military bases in recent weeks. “So now we have to beg the Americans for modern weapons to fight the Islamic State...because they’re equipped with modern American weapons they took from the Iraqi government.”"

8/4/14, "Yezidis: Living in the Shadow of the Islamic State," rudaw.net, Erbil, Kurdistan Region

"Rudaw reporters in the region have witnessed a looming humanitarian catastrophe for Yezidi Kurds and for Assyrian and Chaldean Christians. Thousands are scattered across open plains where many have died from hunger and thirst. Twenty children have died of hunger and many elderly collapsed from exhaustion in the summer heat....

Military officials report the Peshmerga have now re-entered Shangal. But overall the KRG’s ability to protect Yazidi areas has been constrained by an arms embargo imposed by Baghdad and the rest of the world.

The Peshmerga have been confronting ISIS forces armed with weapons seized from the Iraqi army as it fled Mosul in June. These same advanced weapons have now been deployed against Yazidi and Christian civilians.

The Yezidi community fears extermination at the hands of Islamic militants if their region falls to ISIS. Their ancient religion, which is related to Zoroastrianism, predates Christianity and Islam but many traditional and radical Muslims dismiss the Yezidis as devil-worshippers.

In the past decade, insurgents have targeted Yezidi villages and markets with car bombs. In Mosul, Yezidi workers have been kidnapped and beheaded.

Now they fear the worst fate if the Islamic State claims their land, as it did many parts of Iraq’s Sunni heartland.

“No one needs to come to our help,” cried a Yezidi woman demonstrating in front of the U.N. office in Erbil on Monday. “Just give us some arms and we the women will go and rescue our own families and relatives.”

“What do we want? We want humanity. Our children are dying of hunger and thirst under the sun,” she said before breaking down in distress.

Leaders of this peaceful community have urged the international community to come to their aid. They believe their only hope lies in the Peshmerga forces and they have asked the world to give the Peshmerga the help that is needed.

The Peshmerga is part of the Iraqi army under the constitution and the force’s budget and arms should be provided by the federal government. But, since the creation of the post-Saddam army in 2003, the Peshmerga has been denied supplies and funding.

The force has had to rely on what limited resources it has to defend a 1000 kilometer border with ISIS.

The irony is that the kind of weapons that the Kurdish forces need to defend their borders and prevent the expansion of the Islamic State are now in the hands of the Islamist fighters. The arms were supplied to Iraq by the U.S. and then captured from the retreating Iraqi army by the militants."

"Rudaw English is a private online newspaper published by the Rudaw Media Company in Erbil, the capital of the autonomous Kurdistan Region of Iraq. It has no link to..."

"The Yezidis, a religious minority that number 300,000 – 700,000 in Kurdistan, face extermination as the Islamic State (IS), formerly ISIS, spread its Caliphate through northern Iraq. The Pershmerga, the Kurdish army, protects the religious minority, but the soldiers lack equipment and resources.

On Sunday, IS advanced to Sinjar, which is one of very few cities in the world Yezidis call home. The terrorists identify the Yezidis as "devil worshippers." Persecution against the 4,000-year-old religion is not new, but IS might eliminate the people from the earth. The Pershmerga warned residents that IS was around the corner, and many people did not stay.

**WARNING: Some pictures are graphic.** 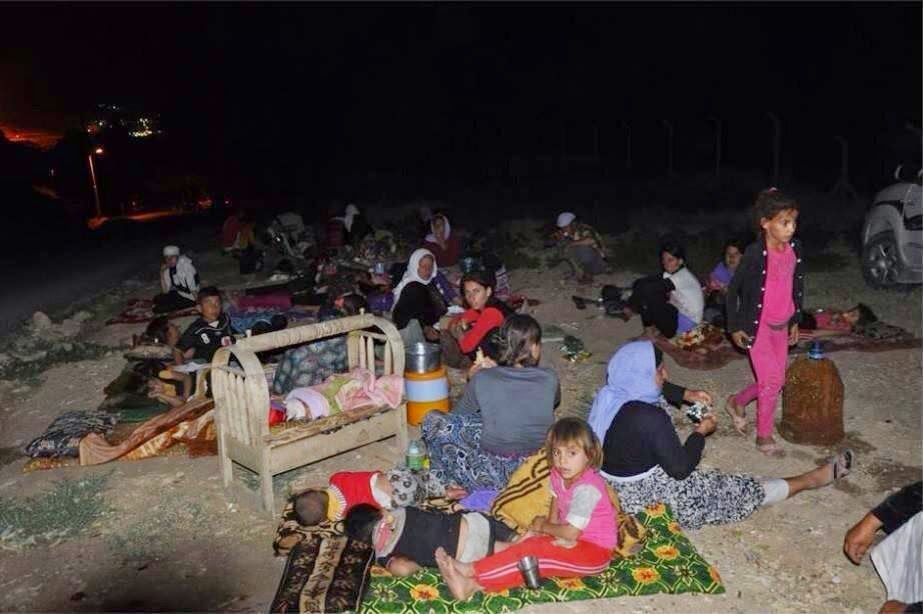 
Earlier on Sunday, the Islamic State captured the town after driving away the Kurdish forces in the region. Witnesses claim that the militants are executing dozens of Yazidis for refusing to convert to Islam. The Gulf News report claimed that 67 young men were shot dead by the militants. Besides executing the Yazidis, the Al Qaeda offshoot, is also reportedly taking Yazidi women for "jihad" marriage.
Mohammed al-Khuzai, an official with the Iraqi Red Crescent Society told NYTimes that ISIS took more than 100 Yazidi families to the airport at the nearby town of Tal Afar, where it executed the men.
"ISIS killed all the men," Khuzai said, "and are planning to keep the women for jihad marriage."

IS did not spare the children. From IBT:


Reports have also come in claiming that the Islamic State militants have forcefully taken away a large number of children from the Yazidi town. A resident told McClatchy DC that militants were taking away young children from their families.

The United Nations Children’s Fund (UNICEF) said forty children from Sinjar were killed in the attack.

"Families who fled the area are in immediate need of urgent assistance, including up to 25,000 children who are now stranded in mountains surrounding Sinjar and are in dire need of humanitarian aid, including drinking water and sanitation services," the organization said.

"Last night [Sunday] they arrested and executed four of my cousins because they worked for the municipality, and already they have begun destroying the homes of the people who fled," a witness told McClatchy.

Thus, IS caused another mass exodus of a religious minority. In Mosul, IS told Christians to convert to Islam, pay a protection tax, or die. The majority of the people chose to leave. There are no Christians in Mosul for the first time in 2,000 years. Now there are no Yezidis in Sinjar. From the Kurdish news outlet Rudaw:


Rudaw reporters in the region have witnessed a looming humanitarian catastrophe for Yezidi Kurds and for Assyrian and Chaldean Christians. Thousands are scattered across open plains where many have died from hunger and thirst. Twenty children have died of hunger and many elderly collapsed from exhaustion in the summer heat. Survivors of two days’ fighting in Sihela, who described their dire situation to Rudaw TV, spoke of a life and death situation on a mountain where thousands of men, women and children spent 24 hours.

Yezidis receive support from the Christians, who also suffer under IS. Mizra Ismail, chairman of the Yezidi Human Rights Organization, and other Yezidi leaders, visited Washington, D.C., with the Syriac Diocese of Our Lady of Deliverance from New Jersey.

“We cannot be Christian but to serve the other,” said Syriac Catholic Bishop Barnaba Yousif Habash.

“We cannot be Christian but to be for the other.…Their situation is considered worse than ours.”