Wearing black hoods Hamas executes 18 of its own citizens suspected of collaborating with Israel, 11 killed in Gaza police station, 7 in front of central Gaza mosque-BBC

"Hamas sources in Gaza say 18 people suspected of collaborating with Israel have been executed.

Officials in Gaza say at least two more Palestinians were killed in Israeli airstrikes overnight, and Israel said more rockets were fired from Gaza. More than 2,070 Palestinians, mostly civilians, and 66 Israelis, mostly troops, have been killed in six weeks.

A Thai national in Israel was also killed by rocket fire early on in the conflict. No-one was injured by the rockets which hit Israel on Friday morning.

Hostilities between Israel and Palestinian militants in Gaza resumed on Tuesday, scuppering efforts in Cairo to achieve a long-term ceasefire deal.

Hamas has insisted on a lifting of the economic blockade of Gaza as part of any longer-term deal.

Israel has vowed to pursue its campaign until "full security" is achieved through the disarmament of Hamas and other groups in Gaza.

Hamas sources said Friday's executions had been carried out by what it called the Resistance, which may suggest the involvement of other armed Palestinian factions.

Hamas officials told Reuters that the first 11 executions were carried out at an abandoned police station.

Witnesses said another seven people were shot by men in Hamas uniforms outside the Al-Umari mosque in central Gaza.

After the first 11 executions, Hamas warned that "the same punishment will be imposed soon on others".

It added that "the current circumstances forced us to take such decisions", suggesting a link between the executions and the killing of the three senior Hamas leaders.

"The armed wing of Hamas, the al-Qassam brigades, has executed 11 Palestinians who were accused of collaborating with Israel during the Gaza war, according to
an Associated Press report.

The Palestinian militant group vowed revenge for the targeting
of its leaders. A security official told AP that the 11 men were
previously sentenced by Gaza courts.

Under Palestinian law, being an Israeli informer is
punishable by death.  In May, Hamas announced the
execution of two men accused of being collaborators.

Palestinian president Mahmoud Abbas is supposed
to approve all executions.
But Hamas has controlled the Strip since winning
elections in the enclave
in 2007."... 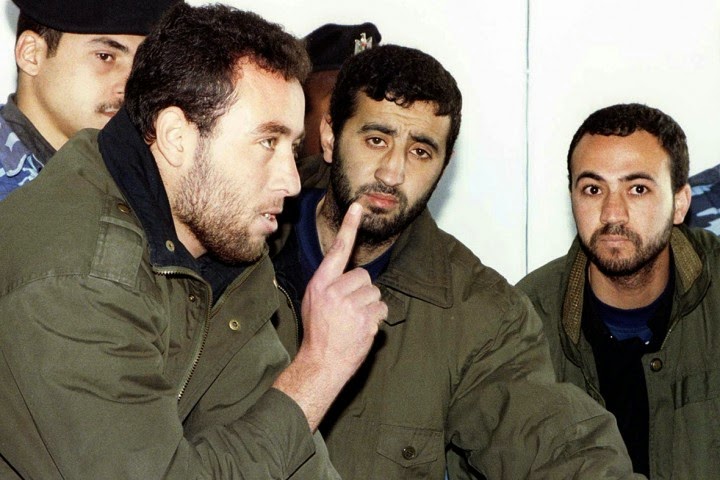 Email ThisBlogThis!Share to TwitterShare to FacebookShare to Pinterest
Labels: Wearing black hoods Hamas executes 18 of its own citizens in Gaza for suspected collaboration with Israel