.
8/17/14, "Yazidi leader to speak TODAY at AFDI rally in solidarity with Israel and all persecuted minorities," PamelaGeller.com 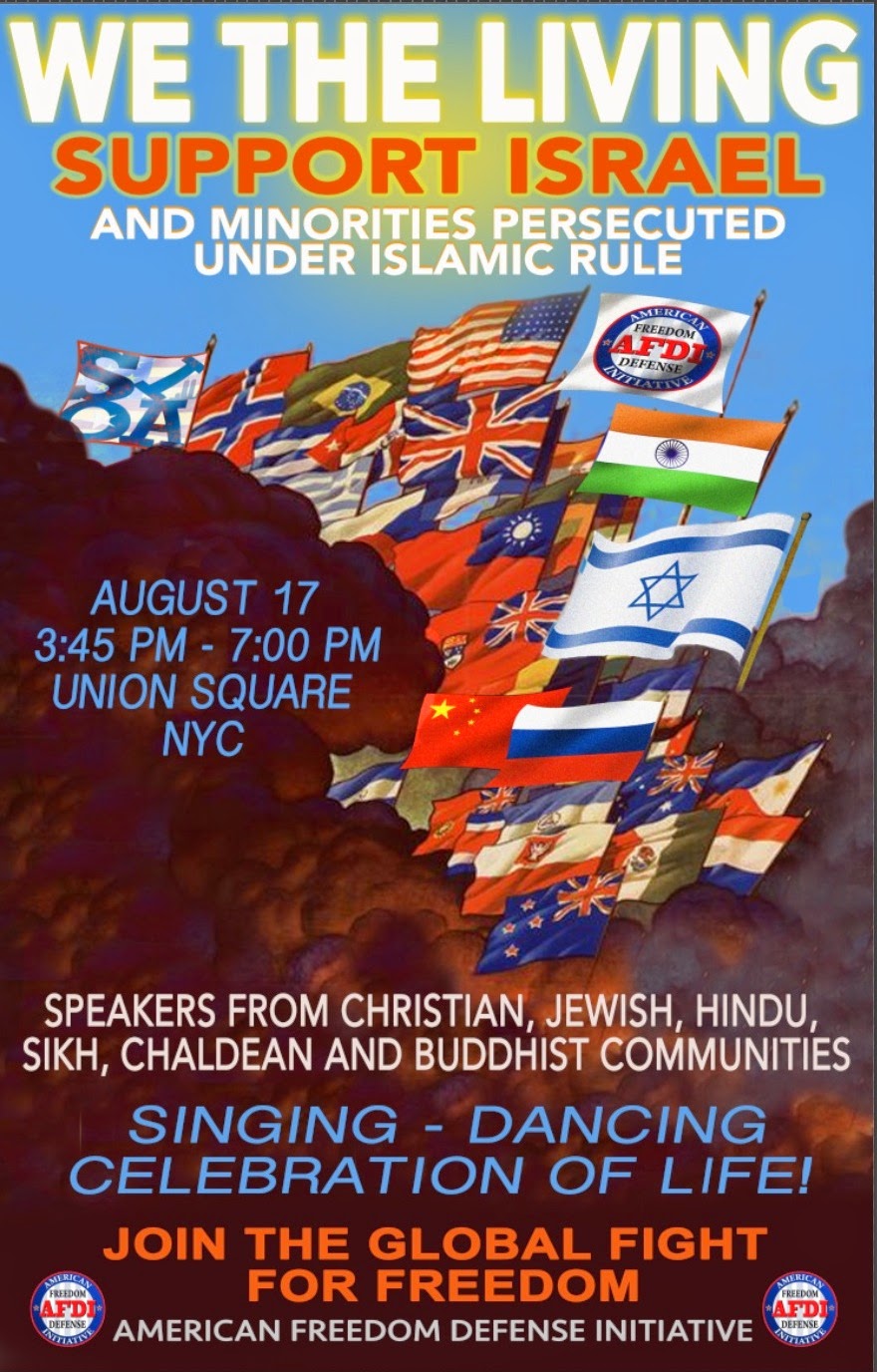 "We can no longer remain blind to the renewed focus on armed jihad in Islamic fundamentalism.


Although MANY still read about the latest events in the Middle East with a sense of distance, the world needs to recognize that it is a false sense of distance! In essence, ISRAEL’S FIGHT AGAINST TERROR AND TERRORISM AND JIHAD IS THE FIGHT OF THE ENTIRE WORLD!


On Sunday, August 17th, from 3:45 to 7pm, the American Freedom Defense Initiative (AFDI) and freedom activist, Assaf Shilony, will be hosting a rally in New York City’s Union Square from 3:45 to 7PM.
.

WE ALL BELONG AT THIS RALLY!


Speakers from a huge variety of backgrounds will be present to speak for Israel, as well as for other minority populations worldwide, which are threatened by the global jihad.

SIGNS FOR THIS RALLY! A MUST!
.
AFDI’s Pamela Geller said in a statement, “Israel is on the front lines of the global jihad, and we stand resolutely and proudly with her. We must also remember that the same jihad that threatens Israel threatens free people around the world. That’s why we are featuring speakers from groups from around the world – people who have experienced the horror of Islamic jihad firsthand. We need to unite and stand together for freedom!”


Pamela Geller also advised demonstrators to come to the event with signs showing support for Israel and minorities subjected to genocide, violence, and oppression by Islamic jihadists.


WE MUST BE THERE IN HUGE NUMBERS!
Geller added, “We are going to stand together for freedom every step of the way, and never give in to the forces of darkness, lies and intimidation.”
.
AFDI stands for:
-       Freedom of speech – as opposed to Islamic prohibitions of “blasphemy” and “slander,” which are used effectively to quash honest discussion of jihad and Islamic supremacism!


-       Freedom of conscience – as opposed to the Islamic death penalty for apostasy!


-       Equality of rights – of all people before the law – as opposed to Sharia’s institutionalized discrimination against women and non-Muslims.

As in Martin Niemoller’s poem:

“First they came for the Socialists, and I did not speak out—

Because I was not a Socialist.

Then they came for the Jews, and I did not speak out—

Because I was not a Jew.

Then they came for me—and there was no one left to speak for me.”

Together we can unite and defeat this threat to a civilized world!"

Ed. note: The white patch behind part of this post is vandalism by my longtime google hackers who dislike free speech.