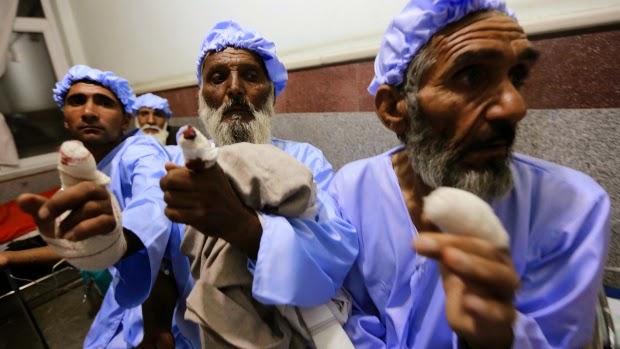 "Men show their fingers after the ink-stained part of their fingers were cut off by the Taliban after they took part in the presidential election, in Herat province on Saturday. (Mohammad Shoib/Reuters)"

"A roadside bomb killed 11 people in Afghanistan, including four election workers, and the Taliban cut off the fingers of nearly a dozen people to punish them for voting
in this weekend's presidential runoff, officials said Sunday.
The Taliban had warned people not to participate in Saturday's vote. The two candidates, former foreign minister Abdullah Abdullah and former finance minister Ashraf Ghani Ahmadzai, have both vowed to improve ties with the West and sign a long-delayed security pact allowing nearly 10,000 U.S. troops to remain in the country for two more years."...