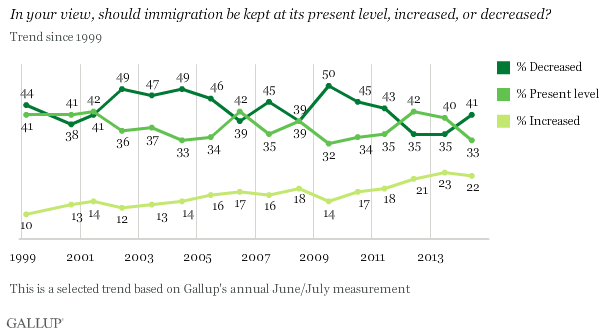 "While illegal immigration typically dominates debates over immigration policy, the issue of legal immigration came to the forefront in the recent Virginia Republican primary when House Majority Leader Eric Cantor was soundly defeated by Tea Party favorite Dave Brat....Brat's case may have been a fairly easy one to make, as new Gallup polling finds fewer than one in four Americans favor increased immigration."... 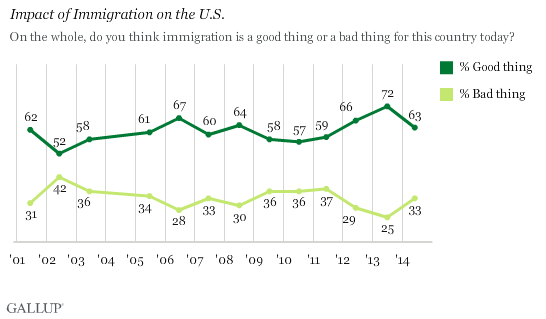 In the past 12 months Americans clearly say "immigration" as it's construed today is bad for our country. (For example, there's no Ellis Island). In Eric Cantor's case it was about much more than "legal" or "skilled" immigrants. Cantor remained silent in the face of the attack on our southern border by unaccompanied illegals many under age 18. Cantor was asked for his response to the current invasion of our southern border by unaccompanied minors, and said he told Obama, "we can work together on things like the Kids." It didn't matter whether he meant past or present "kids." His "kids" statement was reported on June 6 and June 7 and on June 10 he was gone.
.
=============================

"Illegal immigrants have been pouring into the United States, and House Majority Leader Eric Cantor (R-VA) suggested he is willing to work with President Barack Obama to give them amnesty.

Days before what has turned into a contentious June 10 primary against Dave Brat, who has been surging in the polls after centering his campaign on countering amnesty, CBS6 anchor Bill Fitzgerald asked Cantor what the country could do about its illegal immigrants and the children "coming across the border now."

Cantor first falsely insinuated that he was not for amnesty because he was against passing the Senate's bill without changes. He then pivoted by saying if Obama, who enacted the Deferred Action program that has given some illegal immigrant children temporary amnesty and has threatened to unilaterally ease deportations, could demonstrate trustworthiness on immigration, he could work with him on granting amnesty to illegal immigrant children.

Cantor was referring to what has commonly been referred to as his "Kids Act," which, as Breitbart News reported, would grant amnesty to illegal immigrants who were brought to America through "no fault of their own"--like many of the illegal immigrant children who have been pouring into the country in recent weeks."...