US #1 in proportion of lowpaying jobs among developed nations as of 2011 per OECD. In 2001 US ranked 5th in low paying jobs, evidence of "painful transformation" of US-AP

"The U.S. economy has finally regained the jobs lost to the Great Recession. But go easy on the hallelujahs. The comeback is far from complete.

Friday's report from the government revealed an economy healing yet marked by deep and lasting scars. The downturn that began 6½ years ago accelerated wrenching changes that have left many Americans feeling worse off than they did the last time the economy had roughly the same number of jobs it does now....

To many economists, the job figures are both proof of the sustained recovery and evidence of a painful transformation in how Americans earn a living.

"The labor market recovery has been disappointing," said Stuart Hoffman, chief economist at PNC Financial Services. "Even with the new peak, there is still a great deal of slack."

Many of these jobs have been permanently replaced by new technologies: robots, software and advanced equipment that speeds productivity and requires less manpower, said Patrick O'Keefe, director of economic research for the advisory and consulting firm CohnReznick.

"When heavy things need to be moved, we now have machines to do it," O'Keefe said. "It is unlikely in the manufacturing sector that we recover much of the losses."

And during the economic recovery, more people have left the job market than entered it. Just 58.9 percent of working-age Americans have jobs, down from 62.7 percent at the start of the recession.

Some of that decline comes from an aging country in which more people are retiring. But the share of working adults among the overall population is "still bouncing around at the bottom where it was during the worst of the recession" — evidence that meaningful wage gains across the economy are unlikely, O'Keefe said.

The recovery hasn't kept up with the expanding U.S. population. Researchers at the liberal Economic Policy Institute estimate that 7 million more jobs would have been needed to keep up with population growth.

The pain has been concentrated largely among lower- and middle-income workers, according to an analysis by the institute.

Most U.S. workers are "running up the down escalator," said Larry Mishel, the institute's president. Median household income is $52,959, which, after inflation, is $3,303 below its pre-recession level, according to Sentier Research.

Three generally low-paying industries account for more than one-third of the job gains in the recovery: restaurants and bars; temporary staffing; and retail, according to research by the National Employment Law Project. Pay in these sectors averages under $13.34 an hour.

Mike Evangelist, a policy analyst at NELP, said the nation's evolution away from goods production to a more service-oriented economy has slowed hiring in many mid- and higher-paying sectors. The weak job gains in those sectors have slowed overall pay growth, giving consumers less money to spend and depriving the recovery of its usual vigor.

Relative to much of Europe and Japan, lower-wage jobs have accounted for much of the job growth in the United States. About a quarter of U.S. jobs were in low-paying industries in 2011, according to the Organization for Economic Cooperation and Development, a 34-nation association based in Paris.

That was the highest proportion among developed nations, the OECD said. In 2001, the United States had ranked fifth in low-paying jobs.

"We've got a different labor market with a stronger emphasis on part-time jobs," Silvia said. "The traditional labor market is no longer relevant."

about 2.5 million more than before the recession.

Roughly a quarter of those workers would prefer to be full time, according to the May jobs report.

And while the number of full-time workers has risen during the 5-year-old recovery,

the economy still has 2.9 million fewer of them....

Employers added 217,000 workers in May, more than enough to surpass the 138.4 million jobs that existed when the recession began in December 2007. But even as the unemployment rate has slipped to 6.3 percent from 10 percent at the depth of the recession, the economy still lacks its former firepower....

Auto sales last month suggest that consumer spending is shifting into higher gear. Vehicles were purchased at an annual rate of 16.7 million in May, a 7 percent improvement from the 2013 average....In this recovery, the lesson appears to be that every little bit counts."...

Image: "In this June 6, 2014 photo, cook Kim Jarjabka send out two lunch orders at Coppertop restaurant in Valley City, Ohio. According to research by the National Employment Law Project, restaurants and bars, temporary staffing, and retail account for more than one-third of the job gains in the current recovery. Wages in these sectors average less than $13.34 an hour. Photo: Mark Duncan, AP"
.
===========================

In Missouri 5 days before Nov. 2008 election Obama says, "We are 5 days away from fundamentally transforming the United States of America." Kids cheer. 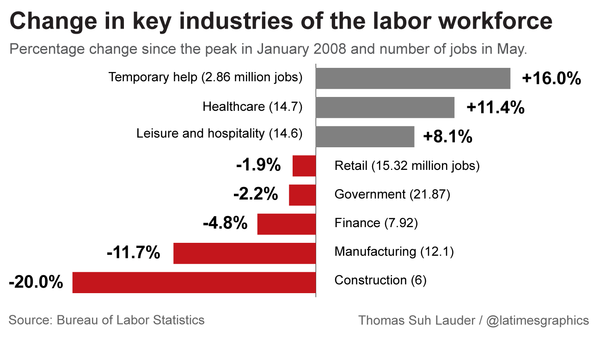