Is it fun to watch Republicans fight amongst themselves? Yes it is. But at the same time, I can empathize with McDaniel supporters.

Here in Georgia, we also have an open primary system where we don’t have to declare a party affiliation when registering to vote, and anybody can vote in either the Democratic or Republican primaries. So I can imagine being just as frustrated if a strong progressive candidate lost a close Democratic primary because the Republican-lite candidate recruited Republicans to swing the election his (or her) way.

If open primaries do increase the likelihood of electing more centrist candidates, then that can be a double-edged sword. For example, Democrats might be relieved when a less extreme Republican is nominated in a safe red state because of open primaries. But then again, it wouldn’t feel so good if a Republican-lite candidate defeated a strong progressive in a blue state for the same reason.

With regard to increased turnout, if a potential voter isn’t familiar enough with the issues to know the difference between a Republican and Democrat…or…is familiar with the issues, but doesn’t have enough in common to affiliate with either party, then I’d prefer that they stay out of the primaries…even if the result is lower turnout. Encouraging people to help nominate candidates for a party that they don’t participate in or, at least, affiliate with isn’t right.

Mitt Romney helps Beltway millionaires and billionaires attempt to silence the Silent Majority once and for all:

Romney backed Utah's "Count my Vote" which is open primaries similar to what Mississippi has and which can be gamed by the rich to silence the voice of the ordinary:

Among comments to Salt Lake Trib:


"offroad999: Nothing new here. More big money politicians trying to buy votes and power. If you value your voice you must go beyond just not signing this petition, you need to educate friends, neighbors and family members."

I believe CMV is about Mike Lee having powerful enemies. Few people in Washington have made any effort to protect our Constitution but Mike Lee has. After the TARP bailouts across the entire nation people said throw them out, but 97% were re-elected. Not Bob Bennett, Utah Republican Delegates fired their Senator who was named in The House of Representatives investigation as being responsible for the mortgage crisis. Talk about having primaries, the Caucus/Delegate system put Senator Orrin Hatch in a primary. Arnold Schwarzenegger became the governor of California because of their direct primary election. CMV is going to end up creating a system where candidates can buy your vote. That's exactly what these wealthy people want."

Utah open primaries were championed by RNC lobbyist types Romney and Leavitt. The lobby class wants to get rid of Sen. Mike Lee and get Bob Bennett back or perhaps get Romney's son Josh in there:


Sweet - the legislature has given us a primary without a runoff, per Buy Your Vote's demands. A candidate can now win with just 20-30% of the vote, if there are enough people in the race.

"You have to hand it to the GOP establishment. When their interests are threatened, they pull out all the stops. They demonstrated that in dragging GOP senator Thad Cochran across the finish line in tonight’s runoff in Mississippi....

Thad Cochran’s allies performed a version of that ploy tonight by openly encouraging liberal Democrats to vote in the primary. Turnout was up by some 15 percent from the June 3 contest between Cochran and Chris McDaniel. The New York Times reported that “turnout increased by 92 percent in Jefferson County, the county where black voters represent the largest share of eligible voters in the country.”
. 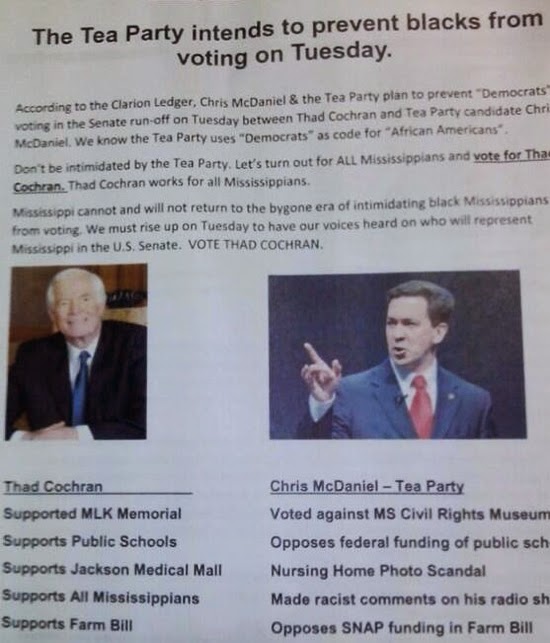 Thad Cochran will continue in the Senate only because the GOP establishment used “walking around” money to drum up minority liberal voters for Cochran. In Mississippi, despite an unenforceable law saying that only voters intending to vote Republican can participate in GOP primaries, there was nothing preventing that kind of primary manipulation....

Austin Barbour, a relative of former governor Haley Barbour, even went so far as to claim of the Cochran campaign:

“We’ve spent a lot of time bringing a conservative message to black voters, as well as to white voters, the old and young, men and women.” Actually, the message was the antithesis of conservatism — that only an aging 76-year-old incumbent can bring home pork-barrel projects that largely benefit a business elite while the state’s voters are saddled with more federal debt."  image via NRO
.
===================

Here in Utah, Republican primaries - once restricted to registered Republicans - have been forced open by the establishment as of this year, in revenge for the GOP kicking Bob Bennett out of his senate seat in 2010.
Who did this? Former Governor and Bush HHS Secretary Mike Leavitt lead the betrayal. He was helped by Mitt Romney, who endorsed the effort.

I won't vote for establishment Republicans ever again."