"McDaniel holds an eight point lead over Cochran on the ballot and is just barely below 50% on the ballot. McDaniel’s definite support (43%) is currently higher than Cochran’s total support (41%)." Cochran "definite" is 38%: 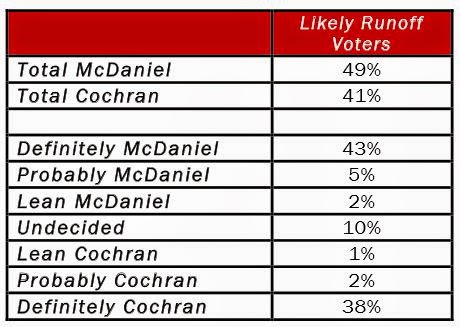 The poll, conducted by WPA Opinion Research, has McDaniel at 49 percent and Cochran at 41 percent."...

On 6/5 McDaniel led by 6 points per Strategic National Poll, via Politico:

The conventional wisdom says Mississippi state Sen. Chris McDaniel has the advantage in the upcoming June 24 Senate runoff — and a new robopoll of likely GOP runoff voters from the group Strategic National feeds that CW by finding the GOP challenger with a 6-point lead. McDaniel takes 52 percent in the poll, with GOP incumbent Sen. Thad Cochran at 46 percent. (McDaniel led the primary with 49.5 percent of the vote, compared with 49.0 percent for Cochran.) Asked if Cochran should continue to contest the runoff or step down and let McDaniel win, 40 percent of voters thought Cochran should step aside. Despite McDaniel’s lead, those surveyed have a slightly more positive view of Cochran than they do of McDaniel: Cochran is at 58 percent favorable and 26 percent unfavorable; McDaniel is at 53 percent favorable, 32 percent unfavorable. The poll was conducted on June 5, two days after the primary; it was not conducted for any candidate or group involved in the race, though Strategic National is closer to the tea-party wing of the GOP."....
.
====================


A poll from the Republican-leaning National Strategic firm found McDaniel leading Cochran 52.49 percent to Cochran with 45.93 percent of likely Republican runoff voters. The poll also found that 40 percent of those surveyed said Cochran should step aside rather than continue to run in the runoff.

The poll was conducted on June 5 (two days after the primary) among 442 respondents. It had a margin of error of plus or minus 4.66 percentage points.

"McDaniel, who is leading in two new polls, is generally considered the frontrunner because he won the first round of balloting, brings a youthful vigor to the race that Cochran at 76 lacks, and generally enjoys more enthusiastic support.

The first poll, a Chism Strategies poll, found McDaniel leads Cochran 50.6 percent to 47.6 percent, just inside the poll’s 3.3 percent margin of error. The second poll from the Strategic Journal, according to Politico’s Morning Score, shows McDaniel with a six-point lead, 52 percent to Cochran’s 46 percent....

Noting, “I mostly stay out of primaries,” Hannity explained his support was rooted in distaste for Washington deal making as he indirectly compared McDaniel to Texas Republican Sen. Ted Cruz.

Ted Cruz goes out there and does what every Republican said they’d do on healthcare and he gets trashed by his fellow senators for doing what they themselves promised to do. I don’t understand it. I really don’t.”

“I kind of feel awkward telling people in Mississippi who to vote for, but I’ve been asked, and I’m giving you the answer: People ask me who I would vote for, and I would vote for Sen. Chris McDaniel,” Hannity said. “That’s my answer.”"...
.
.
Posted by susan at 6:04 AM