Thad Cochran PAC seeking Democrat crossover votes in Republican primary has same address as Mississippi Church-NY Times. Commenter: "An African-American church shilling for the likes of Thad Cochran: Is there a better indication that electoral politics is irreparably broken?"


"The full-page advertisement in Mississippi Link, [bottom of pg.] a weekly newspaper aimed at black residents of Jackson, the state’s capital, urged readers to vote for Senator Thad Cochran in the June 3 Republican primary.

That might be unremarkable except for one thing: The political action committee that paid for the ad

shares an address and leadership with a local church.

“All Citizens for Mississippi” did not appear to exist at the time of the ad’s publication. Its registration as a super PAC with the Federal Election Commission was posted online last week and contains one important clue about its origins. All Citizens for Mississippi shares an address with New Horizon Church International in Jackson and also names Jacqueline Vann, the church’s chief financial officer, as its treasurer.

If church resources were used by the PAC, that could be “potentially problematic" for the church, said Michael Toner, a partner at the Wiley Rein law firm and a former F.E.C. chairman. “The people who are associated with churches, you can be involved in politics, but need to do so in your personal capacity. That’s the dividing line: Is it in their personal capacity?”

The danger for the church is that it, like other I.R.S.-approved charities, could lose its tax status if it participates in a political campaign, whether for or against a candidate. The advertisement appears to have appeared around the same time the group’s F.E.C. registration form was filled out, but the PAC has not filed an independent expenditure report describing the expenditure or any reports listing its donors. An email and a phone call to Ms. Vann at the church’s offices were not immediately returned. 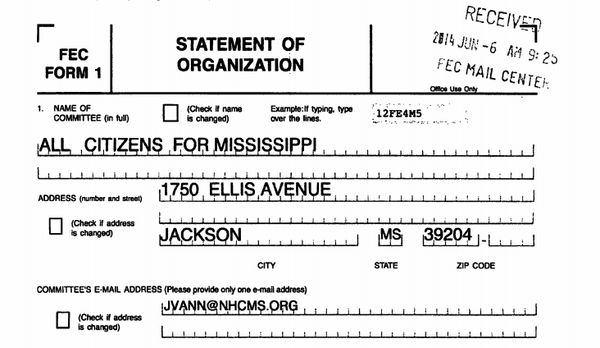 The ad, with a big picture of a smiling Mr. Cochran, asked Democrats to vote for him. It cited the senator as having received praise from Democrats and Republicans alike for providing more than $18 million to Mississippi’s historically black colleges and universities.

Mr. Cochran was unable to win a majority of votes in the Republican primary June 3. He faces Chris McDaniel, a state senator, in a June 24 runoff election."

Isn't it time to close the loophole for 'churches?' So many people are abusing the tax code; churches who want to weigh in on politics and many more who just fraudulently claim to be a "church." Even if they were cheating, why should religious organizations be tax-exempt anyway? Do not they also get the advantages of doing their business in America? If so, they should contribute."

Comment: It's certainly a sign that politics of Haley Barbour and New York billionaires are irreparably broken.